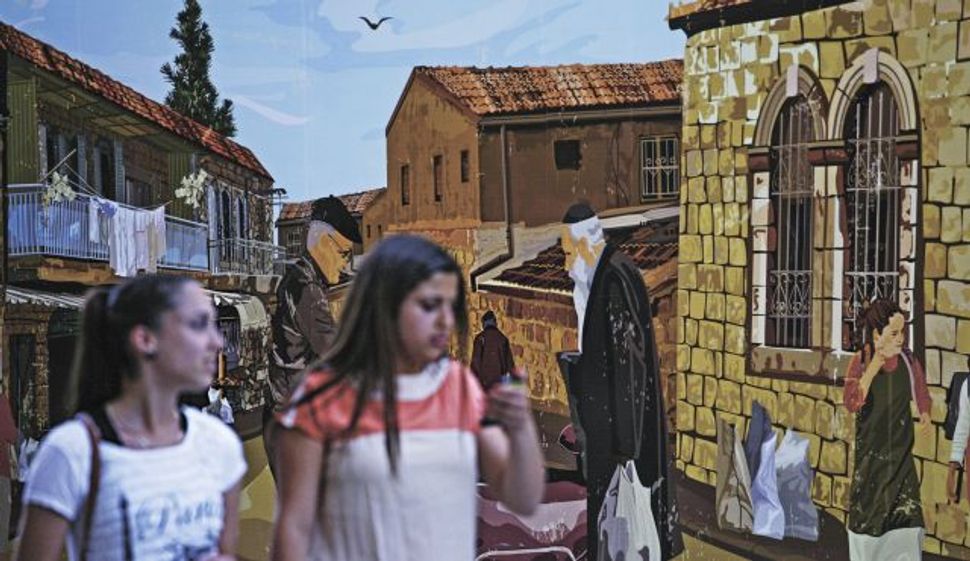 Not Modest Enough: Teenagers walk past a mural in the Ramot mall in Jerusalem. The shopping center was designed as a haven for ultra-Orthodox Jews, but they have now launched a boycott. Image by haaretz

When a new mall opened in a heavily ultra-Orthodox Jewish Jerusalem neighborhood about two years ago, it was agreed that it would offer a different kind of shopping experience. There would be no posters of models in bathing suits and no mannequins in the store windows. Until recently, the Ramot Mall thrived under these conditions, earning praise for its open design and attracting secular and religious locals alike.

“In the cafe you could see a Haredi man with tzitzit [religious fringed undergarments] sitting with his wife and making a blessing on his cake, while next to him there would be a secular man who doesn’t make blessings on anything,” said Ze’ev Lendner, the secular chairman of the neighborhood’s community administration.

The tranquil atmosphere was shattered around three weeks ago when 14 leading rabbis from the neighborhood issued a letter calling for an immediate and total boycott of the mall. The rabbis said the mall’s executives had not upheld their agreements with them. Their primary complaints were what they called the immodest dress of salespeople and the music played over the sound system.

The rabbis ensured letters were distributed at all the Haredi schools in Ramot so that parents and children were aware of the boycott. A storeowner in the mall said parents were also told that if they were seen in the mall, their children would be expelled from school. Ramot – a large neighborhood in northern Jerusalem with a growing Haredi population and a determined secular and national religious one – has been a front in the battle between the ultra-Orthodox and other Israelis for the past two decades.