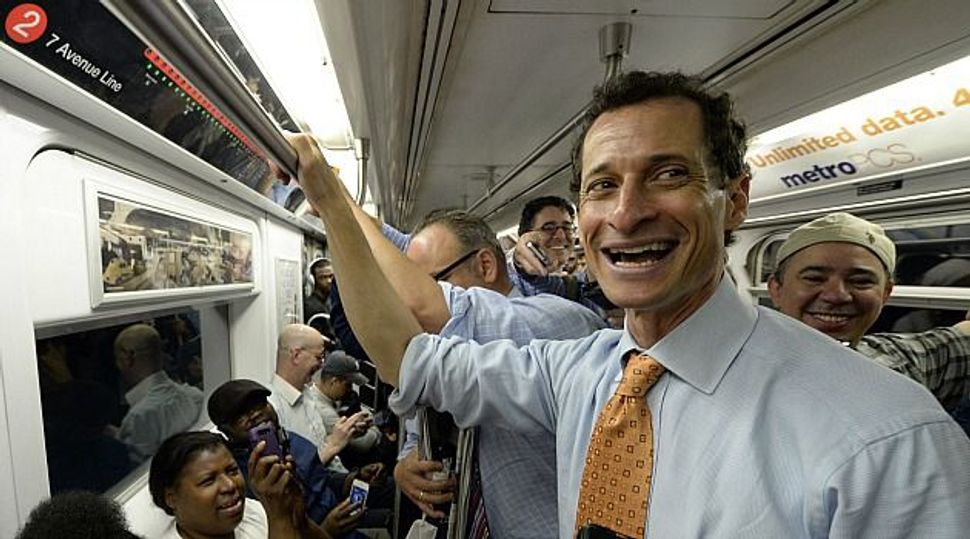 Comeback Kid: A new poll shows Anthony Weiner has 25% of the support in the New York City Democratic mayoral primary field. That puts him on top of putative frontrunner Christine Quinn. Image by getty images

Disgraced ex-Congressman Anthony Weiner, attempting a political comeback two years after resigning in disgrace from the legislature, has taken the lead over his Democratic rivals in the race for New York City mayor, a poll showed.

Weiner, the only Jewish candidate, has the backing of 25 percent of registered Democrats, while City Council Speaker Christine Quinn, the early front-runner and a close ally of Mayor Michael Bloomberg, trails with 20 percent, according to Tuesday’s Wall Street Journal-NBC New York-Marist poll.

Weiner has shaken up the race for City Hall since announcing his candidacy on May 22. His resignation in 2011 had marked a remarkable fall from grace for a politician who was seen as a leading liberal voice in the U.S. House of Representatives and had been widely expected to run in this year’s race for mayor.

Once a popular six-term Congressman representing parts of Brooklyn and Queens, he resigned from Congress after admitting he had sent a lewd picture over Twitter and then lied about it repeatedly.

Since entering the race, Weiner has presented himself as a champion for working-class New Yorkers and a man who has learned from his mistakes.

As recently as February, most city-wide polls had Quinn, who would be the city’s first female and lesbian mayor, leading with nearly 40 percent of Democratic support. But since then, Quinn’s support has seen a slow and steady drop.

The survey of 689 Democrats was conducted last week and had a margin of error of plus or minus 3.7 percentage points.