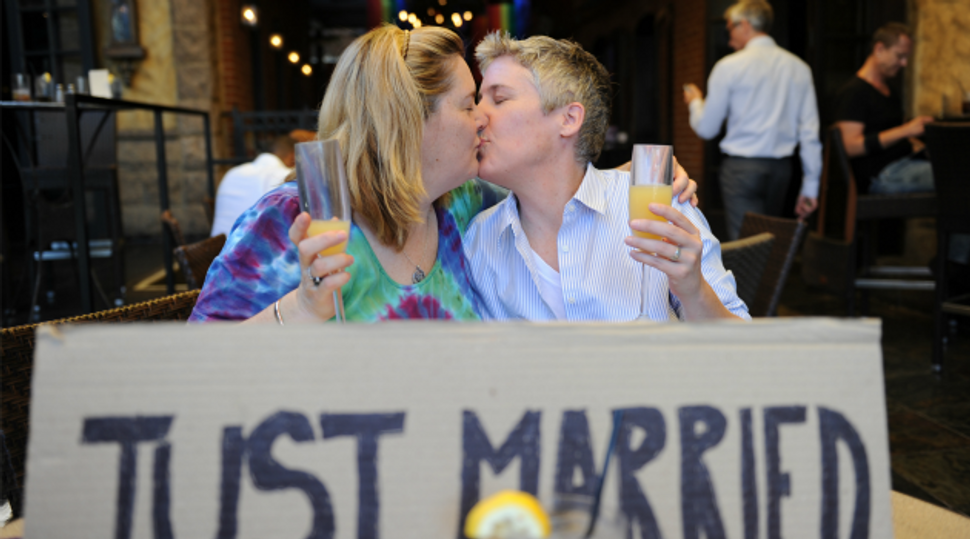 I Do: Gay couples were celebrating from coast to coast after the Supreme Court struck down laws banning gay marriage. Image by getty images

Jewish groups continued to react to the Supreme Court decision on gay marriage, with most mainstream groups lining up to back the twin decisions pushing the legal envelop on same-sex nuptials.

The Anti Defamation League, which filed a friends-of-court brief in favor of gay marriage on behalf of wide array of religious organizations, welcomed the decision and, in a statement, vowed to continue working for implementing full rights for gays. “In this 100th anniversary year, we rededicate ourselves to ensuring, in the words of our founding Charter, ‘justice and fair treatment for all,’” the ADL said in a statement. The group underscored that while it recognizes there are many religious views on marriage, “no one religious understanding should be used to define marriage recognition and rights under civil law.”

Praise for the decisions came also from the Reform movement which has been at the forefront of fighting for gay marriage and has recognized same sex marriage in its religious institutions. The movement called the rulings a “significant victory for the protection of Americans’ civil rights.” Leaders of Reform movement did, however, expressed their disappointment at the scope of the decisions, which did not require gay rights in all states. “The Court missed an opportunity to take a stronger stand for marriage equality today,” the Reform movement noted.

The National Council of Jewish Women said it hoped the Supreme Court’s decision “will inspire more states to join the growing number of marriage equality states.”

But while widespread, praise for the gay marriage decision was not shared by all in the Jewish community.

The Orthodox Union, made clear its opposition for same-sex marriage but also stressed the need to respect all views and its understanding that decisions will not be made necessarily based on religious views.

“Our religion is emphatic in defining marriage as a relationship between a man and a woman. Our beliefs in this regard are unalterable,” the O.U. said in a statement, adding that “at the same time, we note that Judaism teaches respect for others and we condemn discrimination against individuals.”

The group argued that it believes its views on gay marriage “represents a system of universal morality, and therefore can stake a claim in the national discourse. That morality, expressed in what has broadly been labeled Judeo-Christian ethics, has long had a place in American law and jurisprudence.”

Agudath Israel was less nuanced in expressing its views on the decisions.

“Society’s mores may shift and crumble but eternal verities exist,” the group said in a statement. “One is marriage, the union of a man and a woman. Its sanctity may have been grievously insulted by the High Court today, but that sanctity remains untouched.”