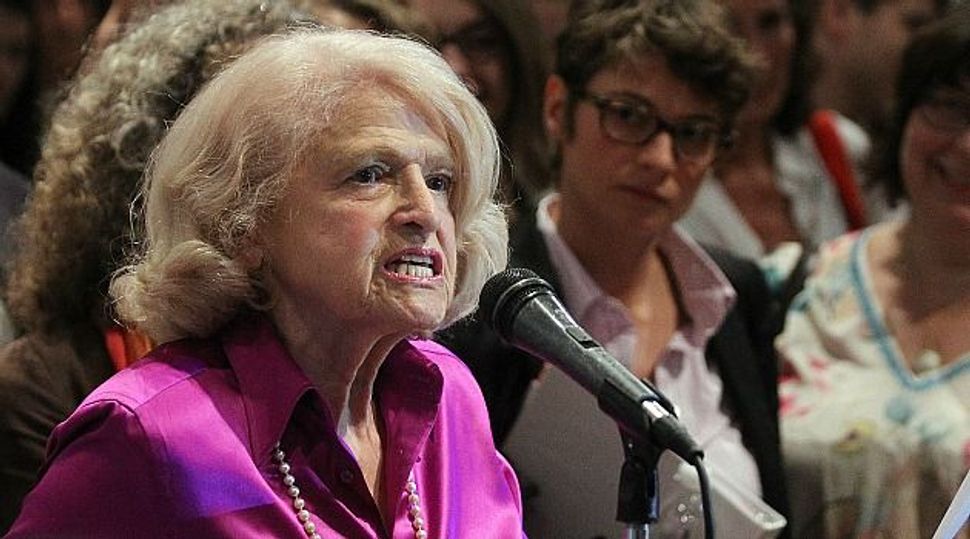 Gone But Not Forgotten: Edith Windsor dedicated her win in the Supreme Court?s decision overturning the Defense of Marriage Act ot her late partner. ?What a way to celebrate the life of my beloved Thea,? she said. Image by getty images

If Thea Spyer, whose death in 2009 set the stage for Wednesday’s landmark Supreme Court ruling on same-sex marriage, were still alive, she might tell her partner, Edith Windsor, “You did it, honey!”

Windsor, who is Jewish and just turned 84 just a few days ago, spoke those words at a triumphant news conference at a gay and lesbian center in Manhattan, hours after the Supreme Court threw out a central part of the Defense of Marriage Act, known as DOMA.

Windsor sued the federal government after she was forced to pay additional estate taxes because it did not recognize her marriage to Spyer under DOMA. Windsor will now be able to claim a $363,000 tax refund, plus interest.

Windsor said the news had brought tears of joy.

“What a way to celebrate the life of my beloved Thea,” said Windsor, who wore a beaming smile.

The decision opens the door for same-sex couples in the 12 states that allow it, plus Washington D.C., to receive federal benefits, and has turned Windsor into an icon.

“It’s an accident of history that put me here,” said Windsor. “If Thea had been Theo,” everything would have been different, she said.

Windsor, a New York resident and former IBM consultant, and Spyer, a psychologist, met in the 1960s in a New York restaurant and spent four decades engaged to be married before they finally tied the knot in Canada in 2007.

Windsor remained closeted for years and wore a circle diamond pin rather than an engagement ring to hide the truth.

“Internalized homophobia is a bitch,” she said. “I lied all the time.”

Now, the legal fight behind her, Windsor said she is looking forward to a quiet retirement.

“I don’t have a ton of years left and I would like to relax a little bit,” said Windsor.

With that, she stepped out into the center’s atrium, where a cramped crowd of people whooped with joy and chanted her name.