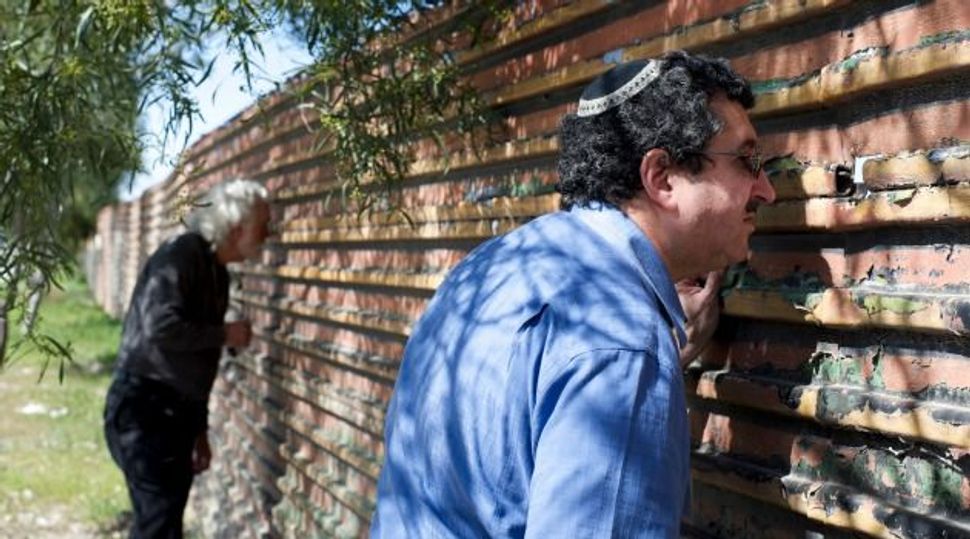 Win in Senate: Rabbi Mark Diamond peers through a corrugated-iron wall along the border with Mexico. The American Jewish Committee leader is part of a nearly unprecendented push by Jewish groups for immigration reform. Image by rex weiner

The immigration overhaul passed in the U.S Senate includes provisions that protect a visa program used by Jewish summer camps and that makes permanent a law that facilitates immigration for victims of religious persecution.

The bipartisan bill passed Thursday by the Senate, 68-32, creates a path to citizenship for the estimated 11 million undocumented workers living in the United States.

A broad array of Jewish groups supported the reforms, and lavished praise on its passage, although its fate in the Republican-led U.S. House of Representatives is uncertain.

“The bill contains priorities the Reform Jewish Movement has long championed, including a pathway to citizenship, legal avenues for future flow of immigrants, enhanced ways for families to be reunited, and important protections for workers,” Rachel Laser, the deputy director of the Reform movement’s Religious Action Center, said in a statement.

The Reform movement and JCPA, the umbrella body for public policy groups, joined other faith-based groups in lobbying senators to modify the proposed changes so they would not onerously affect hiring through J-1.

As it stands, the law must be renewed with each annual budget; the new language in the Senate bill would grant the president discretion to apply it on an as-needed basis.

The law helped facilitate the exit of hundreds of thousand Soviet and Iranian Jews among other minorities. HIAS, which led the bid to make Lautenberg’s language permanent, said it was a fitting tribute to the senator, who died earlier this month.

“If enacted into law, this bill would preserve Senator Lautenberg’s legacy of protecting persecuted religious minorities while creating new opportunities for other persecuted groups—with an emphasis on those seeking religious freedom—to receive protection,” HIAS said in a statement.