No Sign of Breakthrough as John Kerry Peace Talks Drag On 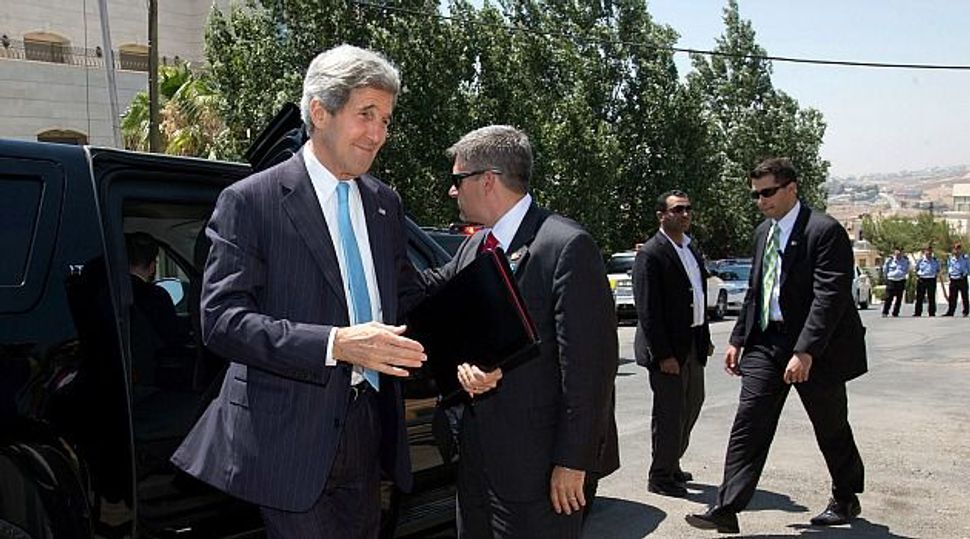 Man in Motion: John Kerry is shuttling between Jerusalem and Amman, Jordan. But both Israeli and Palestinian leaders played down the possibility of a breakthrough. Image by getty images

Secretary of State John Kerry extended his Middle East peace mission on Saturday, shuttling between Jerusalem and Amman for more talks with Israeli and Palestinian leaders on reviving their stalled negotiations.

But officials on both the feuding sides played down prospects of the bustle bringing about any imminent diplomatic breakthrough.

Cancelling a trip to Abu Dhabi, Kerry flew from Jerusalem to the Jordanian capital for a second meeting with Palestinian President Mahmoud Abbas. He then returned to Jerusalem to see Israeli Prime Minister Benjamin Netanyahu for a third time.

Early in the day, an Israeli official said Kerry’s visit could yield an announcement that Israeli and Palestinian delegates would meet under U.S. and Jordanian auspices.

“There is such a possibility, but it is not certain,” the official told Reuters.

But as Kerry headed for his evening meeting with Netanyahu, a member of the latter’s inner circle, Civil Defence Minister Gilad Erdan, sounded less upbeat in a television interview.

Asked whether new direct talks with the Palestinians might be imminent, Erdan told Israel’s Channel Two: “To my regret, no, as of now.”

“To the best of my understanding, Abu Mazen (Abbas) is still demanding the same preconditions, which we have no intention of meeting,” Erdan said.

Peacemaking broke down in 2010 in a dispute over Israeli settlement building in the occupied West Bank and East Jerusalem, which the Palestinians want for a future independent state.

Abbas has said that, for new talks to be held, Netanyahu must freeze the settlements and recognise the West Bank’s boundary before its capture by Israel in the 1967 Middle East war as the basis for the future Palestine’s border. Israel, seeking to keep settlement blocs under any peace accord, balks at those terms.

State Department officials said Abbas and Kerry had met privately for about two hours at Abbas’s residence in Amman before advisers joined them.

“U.S. efforts are continuing (but) until now no results that can lead to the resumption of negotiations,” a Palestinian source, briefed by officials on the talks, told Reuters.

It was unclear whether Kerry would be able to announce a breakthrough before his scheduled departure for Asia on Sunday; U.S. officials have compared his shuttle diplomacy to Henry Kissinger’s Middle East peace efforts in the 1970s.

Kerry – now on his fifth visit as a peace broker – has said he would not have returned to the region so soon if he did not believe he could make progress. He has been guarded about his plans to break the stalemate, while warning time is running out.

He is keen to clinch a deal to resume talks before the United Nations General Assembly, which has already granted de facto recognition to a Palestinian state, convenes in September.

With the Middle East engulfed in turmoil from protests in Egypt to the Syrian civil war, which is spilling into neighbouring countries, Kerry has said it is time for “hard decisions” by Israel and the Palestinians.

“It is urgent because time is the enemy of a peace process,” he said in Kuwait last week. “The passage of time allows a vacuum to be filled by people who don’t want things to happen.”

State Department officials believe the sides will return to negotiations once there is an agreement on confidence-building measures – such as a partial Israeli amnesty for Palestinian security prisoners – and a formula for fresh talks.

As an incentive for talks, Kerry is also working on a $4 billion economic plan led by ex-British prime minister Tony Blair, which would channel new investments in Palestinian areas via the private sector to boost jobs and economic growth.

No Sign of Breakthrough as John Kerry Peace Talks Drag On