After Student’s Killing, Egypt Braces for New Protests Against Government 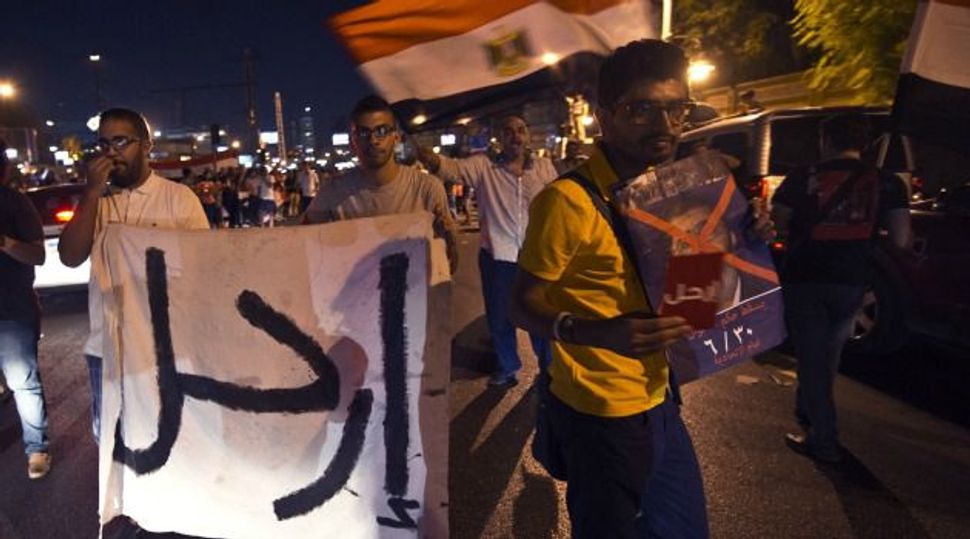 Egyptians and their security forces prepared for demonstrations on Sunday that may determine their future, two years after people power toppled a dictator and ushered in a democracy crippled by bitter divisions.

Waving national flags, thousands gathered on Cairo’s Tahrir Square, cradle of the 2011 uprising against Hosni Mubarak. They hope that, after the working day, millions will rally across the country to unseat President Mohamed Mursi – exactly a year since the Islamist became Egypt’s first freely elected leader.

Across a capital eerily quiet for the start of the working week, Mursi supporters have also congregated – by a mosque not far from the suburban presidential palace. Liberal protest organisers plan to mount a sit-in outside from Sunday evening.

There was none of the street violence seen in the past week. Cairo’s security chief said over 140 known troublemakers had been rounded up in the past day. Some were found with weapons.

Interviewed by a British newspaper, Mursi repeated his determination to ride out what he sees as an undemocratic attack on his electoral legitimacy. But he also offered to revise the new, Islamist-inspired constitution, saying clauses on religious authority, which fueled liberal resentment, were not his choice.

He made a similar offer last week, after the head of the army issued a strong call for politicians to compromise. But the opposition dismissed it as too little to late. They hope Mursi will resign in the face of large numbers on the streets. Some also seem to believe the army might force the president’s hand.

An economic crisis, deepened by political paralysis, has encouraged some to take to the streets in protest. But many others fear renewed unrest will only make matters worse.

Mursi’s Muslim Brotherhood can hope protests fizzle out like previous outbursts. If they do not, some form of compromise, possibly arbitrated by the army, may be on the cards.

Both sides insist they plan no violence but accuse the other – and agents provocateurs from the old regime – of planning more of the street fighting that has killed several people, including an American student, and wounded hundreds over the past week.

Helicopter gunships flew over Cairo. The U.S.-equipped army, though showing little sign of wanting power, warns it may step in if deadlocked politicians let violence slip out of control.

In an interview with London’s Guardian newspaper, Mursi repeated accusations against what he sees as attempts by entrenched interests from the Mubarak era to foil his attempt to govern. But he dismissed the demands that he give up and resign.

If that became the norm, he said, “well, there will be people or opponents opposing the new president too, and a week or a month later, they will ask him to step down.”

Many independent papers urged people onto the streets on the very day that Mursi completes his first year in office: “Street to Mursi: One year’s enough,” headlined Al-Masry Al-Youm. Others referred to what many protesters will demand: “Red card for the president”. Others went simply with: “Judgment Day”.

Liberal leaders say nearly half the voting population – 22 million people – has signed a petition calling for new elections, although there is no one obvious challenger to Mursi.

The opposition, fractious and defeated in a series of ballots last year, hope that by putting millions on the streets they can force Mursi to relent and hand over to a technocratic administration that can organise new elections.

“We all feel we’re walking on a dead-end road and that the country will collapse,” said Mohamed ElBaradei, a former U.N. nuclear watchdog chief, Nobel Peace Prize laureate and now liberal party leader in his homeland.

Religious authorities have warned of “civil war”. The army insists it will respect the “will of the people”.

Islamists interpret that to mean army support for election results. Opponents believe that the army may heed the popular will as expressed on the streets, as it did in early 2011 when the generals decided Mubarak’s time was up.

Among the Islamists at the camp in Cairo, Ahmed Hosny, 37, said: “I came here to say, ‘We are with you Mursi, with the legitimate order and against the thugs’.

“This is our revolution and no one will take it from us.”

At Tahrir Square, banners ranged from “The Revolution Goes On”, “Out, Out Like Mubarak” to “Obama Backs Terrorism” – a reference to liberal anger at perceived U.S. support for Mursi’s legitimacy and its criticism of protests as bad for the economy.

“I am here to bring down Mursi and the Brotherhood,” said Ahmed Ali al-Badri, a feed merchant in a white robe. “Just look at this country. It’s gone backwards for 20 years. There’s no diesel, gasoline, electricity. Life is just too expensive.”

The Egyptian army, half a million strong and financed by Washington since it backed a peace treaty with Israel three decades ago, says it has deployed to protect key installations.

Among these is the Suez Canal. Cities along the waterway vital to global trade are bastions of anti-government sentiment. A bomb killed a protester in Port Said on Friday. A police general was gunned down in Sinai, close to the Israeli border.

Mursi complains the media are vilifying him. The authorities have taken legal action against journalists and media owners, some accused of corruption, others of insulting the president.

Opponents cite that among evidence that the Brotherhood, suppressed for decades under Mubarak, aims to use its organised, vote-winning power to cement itself and its Islamic agenda deep in the state, in much the same way as the ousted leader.

Observers note similarities with protests in Turkey this month, where an Islamist prime minister with a strong electoral mandate has been confronted in the streets by angry secularists.

For many Egyptians, though, all the turmoil that has followed the Arab Spring has just made life harder. Standing by his lonely barrow at an eerily quiet downtown Cairo street market, 23-year-old Zeeka was afraid more violence was coming.

“What’s happening now in Egypt is shameful. There is no work, thugs are everywhere … I won’t go out to any protest. It’s nothing to do with me. I’m a tomato guy.”

After Student’s Killing, Egypt Braces for New Protests Against Government