Gazan Who Disappeared To Egypt Held by Police in Israel 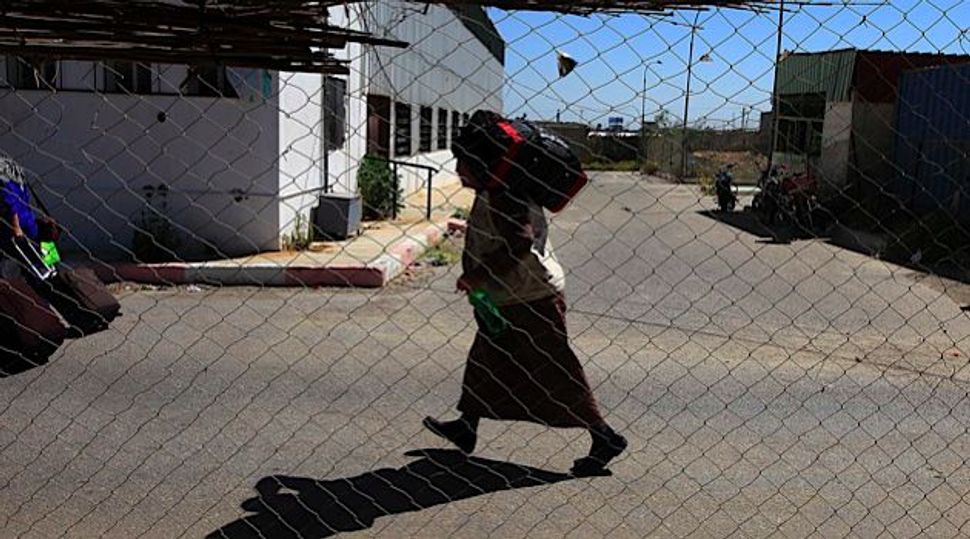 On Foot: A Gazan crosses from Egypt into Southern Gaza at the Rafah border crossing. Image by Getty Images

A Palestinian from the Gaza Strip who vanished while visiting Egypt this month is under arrest in Israel for alleged security offences, his family and his Israeli lawyer said on Sunday.

They said they did not know how Wael Abu Rida, 35, ended up in the Jewish state. The possibility he was seized from Egyptian Sinai territory could embarrass the Islamist-rooted government in Cairo at a time of major domestic unrest.

Abu Rida, who lives in the southern Gaza Strip, went to a town near the Egyptian capital two weeks ago to seek medical treatment for his son, according to his wife, Amani, who accompanied him there.

“While we were in Egypt, Wael received a call from a friend asking him to come to Sinai,” she told Reuters. “I never heard from him since.”

The rendezvous, Amani Abu Rida said, was in the Egyptian side of Rafah, a town that straddles the Gaza-Sinai border. She added that she did not know the friend who summoned her husband.

Israel’s Public Defender’s Office said it had received Abu Rida’s case on June 22 and assigned him a lawyer, Elziadna Kamal. Reached by phone, Kamal said the case was “security related rather than criminal”.

Kamal said he did not know how Abu Rida was brought to Israel and declined to discuss the case further, citing a court-issued gag order in Israel.

Relatives said an unidentified man had informed the family by phone last week that Abu Rida was in Israeli custody, adding that they knew of no ties he may have to Palestinian militants.

“I am clueless. We are all clueless as to why this happened,” Abu Rida’s brother Ibrahim said.

Amani Abu Rida said her husband was a former policeman who lost his job when Hamas Islamists took over Gaza in a brief 2007 civil war with the rival U.S.-backed Palestinian administration.

Locked in an armed standoff with Hamas and other Gaza factions, the Israelis have sometimes struck further afield against targets suspected of being part of the supply line for rockets to the Palestinian enclave.

Dubai accused Israeli spies of killing a Hamas armourer in the Gulf emirate in 2010. The next year, a Gazan engineer was abducted while visiting Ukraine and is now being prosecuted in Israel as a Hamas rocket expert – charges he has denied.

Any such actions in Sinai would be especially touchy, however, given widespread hostility among Egyptians to Israel and the landmark 1979 peace accord between the countries.

As part of that agreement, the desert peninsula is largely demilitarised. But the Egyptians have been stepping up security sweeps, with tacit Israeli backing, in a bid to stem spreading lawlessness, Islamist militancy and weapons trafficking to Gaza.

A senior Israeli official who spoke to Reuters about relations with Egypt declined all comment on Abu Rida.

But the official stressed that Israel, as a matter of policy, did not send its forces into Sinai: “It would threaten the very foundation of our peace accord with Egypt because what sets the tone today is (Egyptian) public opinion.”

“I can say that, when there is a threat, our clear preference is that the Egyptian authorities deal with it,” said the official, who spoke on condition of anonymity.

The International Committee of the Red Cross in Jerusalem said it was helping Abu Rida’s family determine his whereabouts.

Gazan Who Disappeared To Egypt Held by Police in Israel