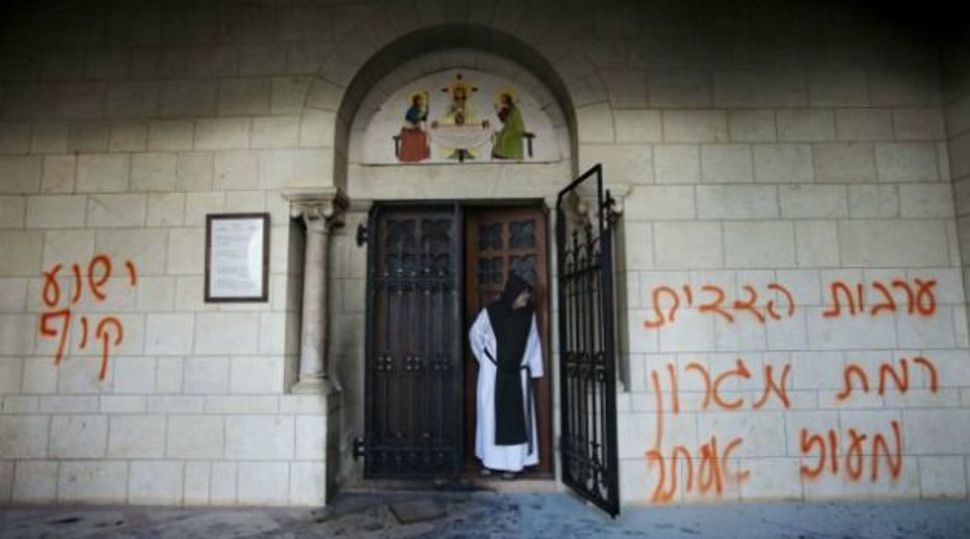 An Israeli is under arrest for the vandalism of a Christian monastery in the occupied West Bank last year, carried out in solidarity with hardline Jewish settlers, police said on Monday.

Graffiti left on the 19th-century Latrun Monastery referred to Migron, an unauthorised settler outpost evacuated by the Israeli government. The words “Jesus is a monkey” were also daubed on the wall in Hebrew, and the monastery’s doors torched.

The September act was condemned by Prime Minister Benjamin Netanyahu, who said the perpetrators had threatened freedom of religion and must be punished.

Netanyahu has become increasingly concerned by so-called “Price Tag” vandalism by Jewish ultranationalists aimed at causing offence and embarrassing the Israeli authorities they blame for trying to curb settler activity.

His rightist, pro-settler coalition government also fears that such vandalism, called Price Tag by militant settlers who want to exact a price from the authorities, because it could trigger violence with the Palestinians.

He was due to be arraigned later on Monday.

The Netanyahu government this month signalled a crackdown on Price Tag attacks by empowering Israeli security forces to investigate, detain and interrogate suspects more aggressively – measures akin to their handling of Palestinian militants.

The vandalism has mostly focused on Palestinian property, including mosques, but has at times targeted Christian churches and Arab sites inside Israel.

The Latrun monastery is near Jerusalem on land Israel captured in the 1967 war, and then annexed, in a step that has never been recognised internationally. It is surrounded by a valley, close to the West Bank’s “Green Line” boundary with Israel, where fighting took place in two Arab-Israeli wars.