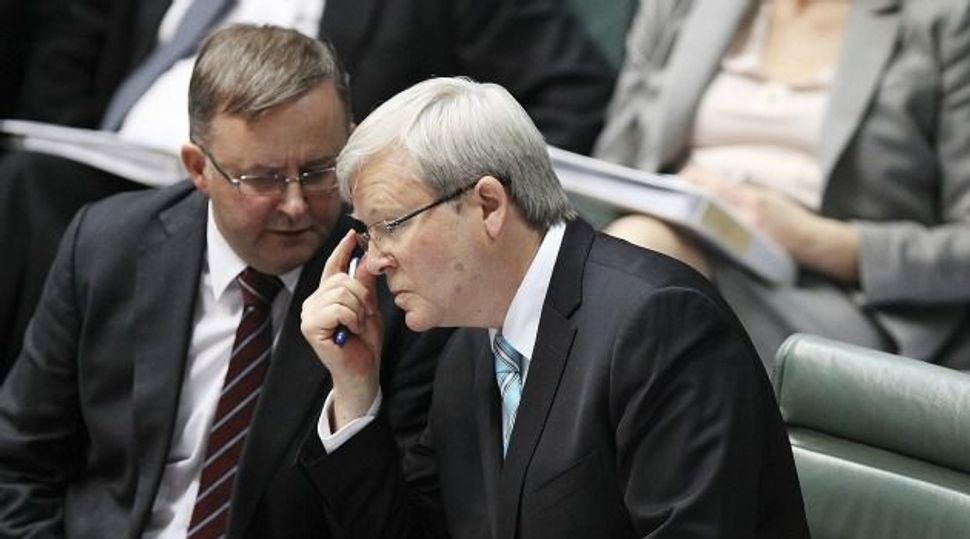 Australia’s new deputy prime minister is a founding member of the Parliamentary Friends of Palestine group.

Anthony Albanese, a longstanding member of the left faction of the Labor Party, was sworn in by Australia’s Governor-General Quentin Bryce Monday as part of Kevin Rudd’s new cabinet.

Rudd was parachuted into power last week for his second stint as prime minister after Julia Gillard called a leadership ballot amid plunging polls and rising support for Rudd.

Rudd, who served as prime minister from 2007 to 2010, said the day after he was re-elected that he doubted he would stick to the federal election date selected by Gillard of September 14, which is Yom Kippur, because of the “massive inconvenience” to Australia’s 110,000-plus Jews.

Rudd’s re-election as party leader sparked a bounce in the polls, but Labor still trails the conservative Liberal Party led by Tony Abbott. The election must be held by November 30. Albanese, who describes himself as “a strong advocate of justice for Palestinians,” has said he is “very critical of a lot of Israel’s policies.”

But he has also been at the forefront of the fight against those promoting a boycott of Israeli goods, blasting the campaign as “clumsy and counterproductive.”

Michael Danby, a pro-Israel Jewish legislator inside the Labor government, said although Albanese “doesn’t have my views on the Middle East,” he does support a two-state solution.

Danby also pointed to pro-Israel supporters appointed by Rudd in the cabinet, including Mark Dreyfus, Mike Kelly and Bill Shorten.

Rudd also promoted to his Cabinet Melissa Parke, who worked in Gaza for two years as part of UNWRA’s legal team, as well as Ed Husic, the first Muslim ever appointed to an Australian cabinet.