In Cairo’s Streets, Protesters Convinced Military Will Force Morsi Out 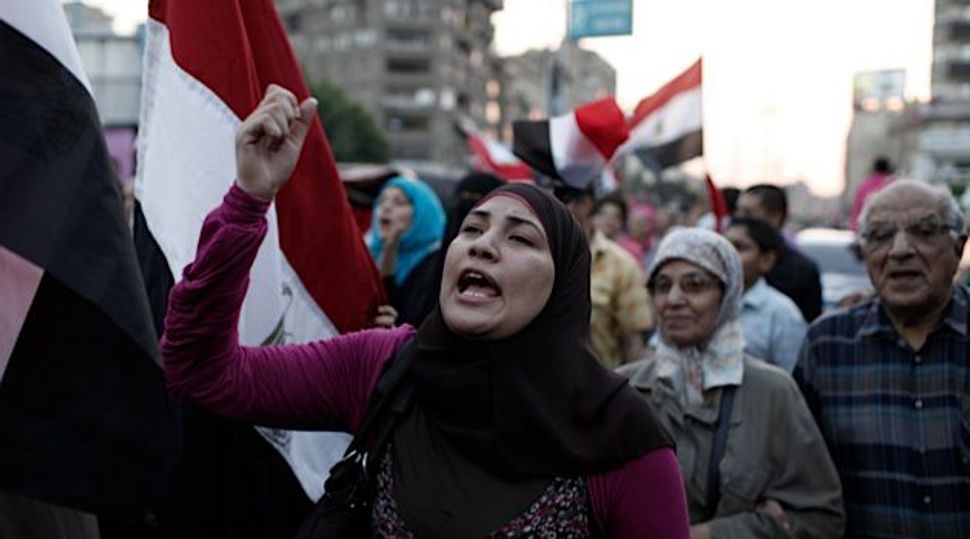 The Egyptian opposition senses that the time has come. 24 hours before the end of the military’s ultimatum, the activists believe it is time to continue mixing it up. When, at noon, the report came in that President Mohamed Morsi met with army commanders in his palace, the crowd in Tahrir square cheered loudly, convinced that the army would force Morsi to surrender. In the afternoon, at the end of the work day, tens of thousands of protesters poured into the square, welcomed by fireworks and speeches. Families with children filled the Nile’s bridges, waving Egyptian flags demonstrating that they are “against Morsi, but for Egypt.” The atmosphere is calm. Those looking for violence have gone to the hot spots such as the Presidential Palace or the Muslim Brotherhood offices. Police officers surround the square, munching on potato chips and trying to get out of the sun. It doesn’t seem they are planning any activity tonight.

The upcoming days will not only serve as a test of Morsi’s survival skills, they are also a test for the opposition. The Egyptian opposition, is, in fact, composed of three separate movements, united only in their hatred of Morsi. Just as in Israel, Balad and United Torah Judaism are both part of the same opposition, in Egypt the opposition includes the extremist Salafi A-Nur party, hoping to enforce Islamic law without apology, the liberal forces headed by billionaire Naguib Sawiris, and the April 6 movement, featuring young, educated Egyptians, social network wizards demanding true democracy. These movements have different motivations. A-Nur was taken aback by Morsi ignoring them despite their unprecedented showing in the parliamentary elections. Some of their demands hardly interest the general public, such as the removal of Prosecutor General Talaat Abdullah, appointed by Morsi in April in a constitutional fiasco, claiming that as a Muslim Brotherhood member he harasses their supporters. Sawiris has other interests. He is one of the richest men in Egypt and the economic stagnation is bad for his bank account. As a Christian, Islamic rule is a clear danger to his businesses. Pundits in Egypt wonder whether Morsi will try to handle the crisis by splitting up the opposition.

In Cairo’s Streets, Protesters Convinced Military Will Force Morsi Out