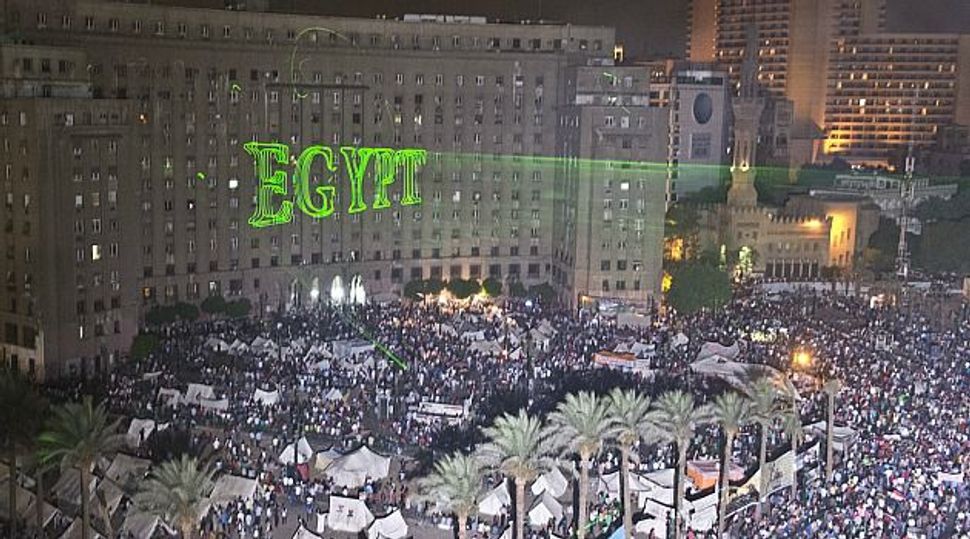 Egypt’s army commander and Islamist President Mohamed Mursi each pledged to die for his cause as a deadline neared on Wednesday that will trigger a military takeover backed by protesters.

Military chiefs, vowing to restore order in a country racked by demonstrations over Mursi’s Islamist policies, issued a call to battle in a statement headlined “The Final Hours”. They said they were willing to shed blood against “terrorists and fools” after Mursi refused to give up his elected office.

The armed forces general command was holding a crisis meeting, a military source said, less than five hours before an ultimatum was due to expire for Mursi to either agree to share power or make way for an army-imposed solution.

In an emotional, rambling midnight television address, the president said he was democratically elected and would stay in office to uphold the constitutional order, declaring: “The price of preserving legitimacy is my life.”

Liberal opponents said it showed he had “lost his mind”.

The official spokesman of his Muslim Brotherhood movement said his supporters were willing to become martyrs to defend Mursi.

“There is only one thing we can do: we will stand in between the tanks and the president,” Gehad El-Haddad told Reuters at the movement’s protest encampment in a Cairo suburb that houses many military installations and is near the presidential palace.

“We will not allow the will of the Egyptian people to be bullied again by the military machine.”

The state-run Al-Ahram newspaper said Mursi was expected to either step down or be removed from office and that the army would set up a three-member presidential council to be chaired by the head of the Supreme Constitutional Court.

A military source said he expected the army to first call political, social and economic figures and youth activists for talks on its draft roadmap for the country’s future.

A mass of revellers on Cairo’s Tahrir Square feted the army overnight for, in their eyes, saving the revolutionary democracy won there two years ago when an uprising toppled autocratic President Hosni Mubarak in 2011.

But Mursi’s backers denounced the army’s intervention as a “coup”. At least 16 people, mostly supporters of the president, were killed and about 200 wounded when gunmen opened fire on pro-Mursi demonstrators at Cairo University campus.

The Muslim Brotherhood accused uniformed police of the shooting. The Interior Ministry said it was investigating.

Central Cairo was quiet by day. Many stores were shuttered and traffic unusually light. The stock market index fell 1.7 percent on fears of bloodshed. The Egyptian pound weakened against the dollar at a currency auction, and banks said they would close early, before the army deadline.

Military sources earlier told Reuters the army had drafted a plan to sideline Mursi, suspend the constitution and dissolve the Islamist-dominated upper house of parliament after the 5 p.m. (1500 GMT) deadline passes.

The opposition National Salvation Front, an umbrella group of liberal, secular and leftist parties, and the “Tamarud – Rebel!” youth movement leading the street protests have both nominated ElBaradei to negotiate with army leaders on a post-Morsi transition.

Coordinated with political leaders, an interim council would rule pending changes to the Islamist-tinged constitution and new presidential elections, the military sources said.

They would not say what was planned for the uncooperative president, whose office refused to disclose his whereabouts.

In his 45-minute address to the nation, Mursi acknowledged having made mistakes and said he was still willing to form a national unity government ahead of parliamentary elections and let a new parliament amend the constitution.

But he offered no new initiative and rejected calls to step aside, saying it was his sacred duty to uphold legitimacy – a word he repeated dozens of times.

The president accused remnants of Mubarak’s former regime and corrupt big money families of seeking to restore their privileges and lead the country into a dark tunnel.

Liberal opposition leaders, who have vowed not to negotiate with Mursi since the ultimatum was issued, immediately denounced his refusal to go as a declaration of “civil war”.

“We ask the army to protect the souls of Egyptians after Mursi lost his mind and incited bloodshed of Egyptians,” the Dustour Party said in a statement.

The youth movement that organised the mass protests urged the Republican Guard to arrest Mursi immediately and present him for trial.