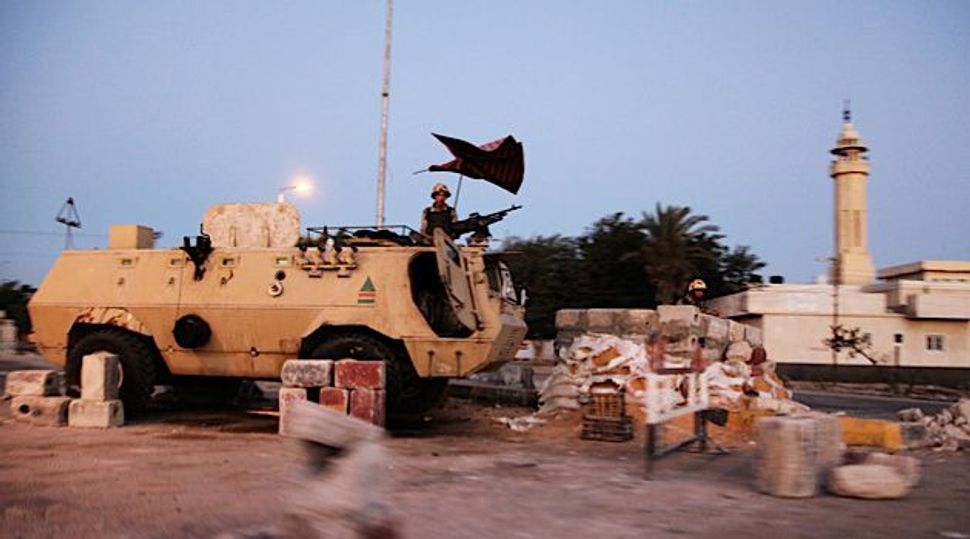 Armed men attacked four security checkpoints on Sunday in the North Sinai town of Sheikh Zuweid, close to Egypt’s border with Israel and the Gaza Strip, part of an upsurge of violence there since Wednesday’s overthrow of Islamist President Mohamed Mursi.

Gunmen in pickup trucks exchanged gunfire with soldiers and police in the lawless province in the early hours of the morning, but there were no casualties, security sources said.

Hardline Islamists have launched sporadic attacks in North Sinai since the ouster of longtime President Hosni Mubarak in 2011 created a security vacuum in the region.

On Friday, five security officers were killed in skirmishes with suspected militants in El Arish, the regional capital.

On Saturday, a priest was also killed there by a group of militants, four other checkpoints were fired upon and an explosion hit an Egyptian pipeline supplying gas to Jordan.

The fire caused by the explosion was under control by early Sunday morning, state media reported. The pipeline has been attacked more than 10 times since Mubarak’s overthrow during the Arab Spring uprisings.

It was not immediately clear if the latest attacks were linked to the ouster of Mursi, democratically elected a year ago, by the military after nationwide protests. His Muslim Brotherhood movement has since held its own protests in which dozens have been killed.

On Sunday, the Salafi Jihadi group, one of the biggest Sinai-based Islamist militant groups, issued a statement on a jihadist website saying that “current events ravaging the country” were affecting Sinai.

It also threatened attacks on the “repressive practices” of the police and military forces on people in Sinai.

The group has issued statements threatening attacks on Israel previously, but this was the first known direct threat they have issued against Egyptian security forces.