Women of Wall Forced Far Away From Kotel 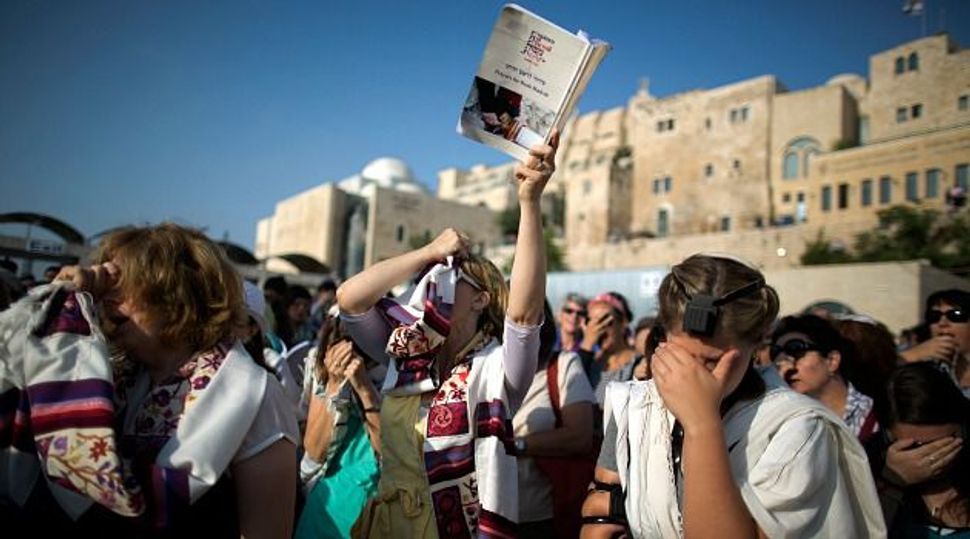 Women of the Wall conducted its monthly prayer service at the Western Wall plaza with occasional disturbance from protesters, but were quarantined far from the wall itself.

The women, who came to the holy site Monday morning to mark the beginning of the Hebrew month of Av, were blocked with barricades in the northeastern corner of the plaza. The Western Wall was not in sight, blocked by the Mughrabi Bridge to the Temple Mount.

“It sucks,” Women of the Wall’s chairwoman, Anat Hoffman, told JTA during the service. “It was a surprise.”

A police spokeswoman told JTA that the barricade was placed far from the wall for the women’s “personal safety.” Thousands of haredi Orthodox girls and women arrived ahead of the Women of the Wall, packing the women’s section of the Western Wall plaza, praying silently and blocking Women of the Wall from entering.

A crowd of mostly male haredi Orthodox protesters surrounded the barricade, with some protesters singing and yelling epithets such as “Get out, Nazis!” Later in the service, protesters threw eggs and a bottle of water at the women, striking a male supporter of the group in the head.

Midway through the service, the women crowded close to the barricade, face to face with the protesters. The women held their prayer books in the air and sang loudly, trying to outmatch the chants from the other side of the police line.

Women of the Wall gathers at the beginning of each Jewish month for a women’s Rosh Chodesh service at the Western Wall. Members have been arrested in the past for wearing prayer shawls because of a law forbidding any practice that falls outside of the wall’s “local custom.”

In April, a judge determined that the group’s activities did not contravene the law. Since then, none of the women have been arrested. April’s Women of the Wall service saw thousands of Orthodox girls pack the plaza, and that month, a police barricade enclosed Women of the Wall in the plaza’s center, separate from a crowd of protesters.

In June, a barricade enclosed the women into a space adjacent to the wall.

Women of Wall Forced Far Away From Kotel