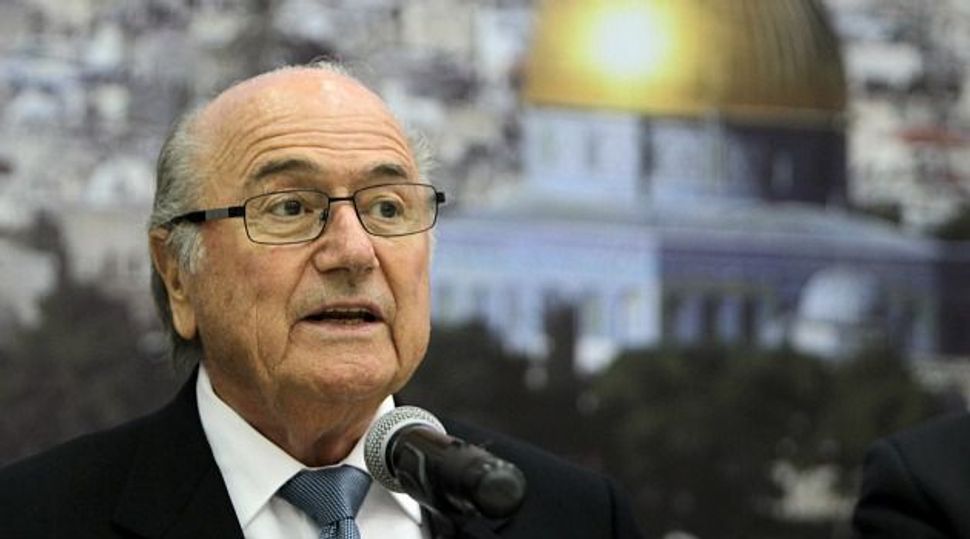 Israeli Prime Minister Benjamin Netanyahu showed the president of the international soccer federation proof that Palestinian soccer fields have been used to launch rockets at Israel.

Netanyahu met Tuesday with FIFA President Joseph Blatter a day after Blatter visited sites in the West Bank, including the opening of the new offices of the Palestine Football Association near Ramallah.

Netanyahu showed Blatter aerial photographs from Nov. 16, 2012 that reveal long-range Fajr-5 missile launch sites in the Gaza soccer stadium. Netanyahu also showed Blatter a video from March 10, 2012 of a match between the Israeli soccer teams of Beersheva and Um Al-Fahm being halted due to rocket fire at the stadium.

“This is a double war crime,” Netanyahu said. “You’re firing on civilians and you’re hiding behind civilians.”

The Israeli leader also referred to recent media interviews with Palestinian Football Association President Jibril Rajoub in which Rajoub said that if the Palestinians had an atomic bomb, they would have already used it on Israel and that Israel is the enemy of the Palestinian people.

During his West Bank visit, Blatter said he would speak to Israeli political leaders about easing travel restrictions on Palestinian players between the West Bank and Gaza.

“I will go to defend not only the Palestine Football Association but I will defend the basic principles of FIFA, (which are) to connect people and not to separate people,” Blatter said.

He added that the principles are “to recognize each other through football and to live not only in peace but in harmony.”

Rajoub said at his meeting with Blatter that if the issue of travel of Palestinian players is not resolved satisfactorily, he will ask the FIFA Congress to expel Israel.