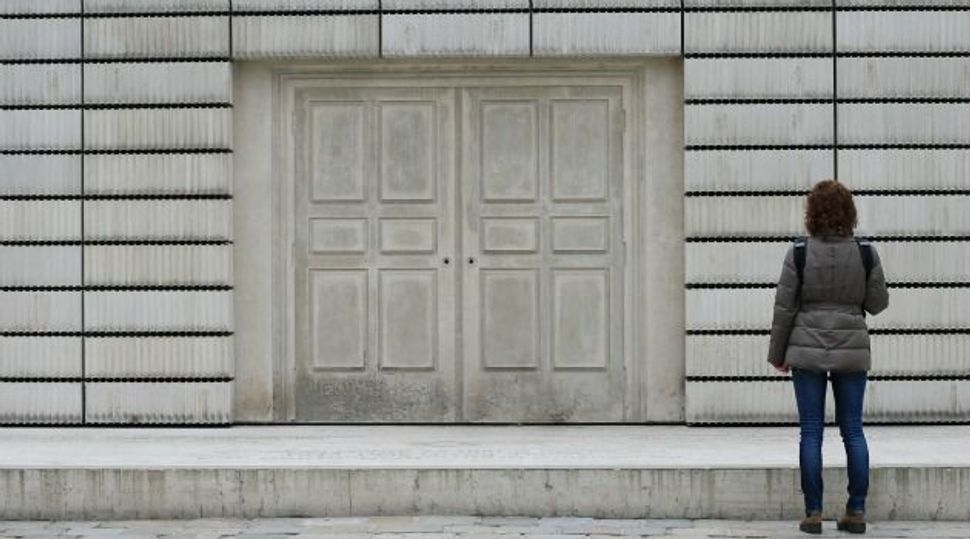 Jewish Center: A woman peers at the Holocaust museum in Vienna. A new Jewish cemetery unearthed in the Austrian capital could rival one in Prague as a cultural treasure.

Jewish gravestones unearthed at a small cemetery in Vienna were hailed on Wednesday as historically important cultural treasures that could rival the famed Jewish cemetery in Prague.

Restoration work at the 16th century Seegasse cemetery has discovered 20 gravestones that are centuries old and were buried by Viennese Jews in 1943 to hide them from the Nazis ruling the country, the IKG Jewish community organisation said.

Many Jewish cemeteries were destroyed during World War Two by the Nazis who stole headstones and desecrated graves.

The IKG said these gravestones were found carefully buried in two to three layers separated by earth and could be just the first of many other “hidden jewels” to be found there.

Their location had remained unknown as many of the people who hid the gravestones did not survive the war.

“Their significance in terms of cultural history is certainly comparable with Prague,” a spokesman for the Vienna city council’s cultural commissioner, Andreas Mailath-Pokorny, said on Wednesday.

IKG President Oskar Deutsch praised the city for confronting its past and helping to restore the cemetery, now located in the inner courtyard of an old people’s home.

Dozens of headstones have already been refurbished in a project that Vienna and the Austrian government started in 2004 and is slated to continue until 2018 but this was the first time that gravestones of this age were unearthed.

The project will make Seegasse the only Jewish cemetery in the world to have been restored to its pre-war state, an IKG statement said.

“After the extensive restoration of the original image of this cemetery, it could act like the Jewish cemetery in Prague as a cultural jewel of Vienna,” Deutsch added.

The Jewish cemetery at Prague was used from the early 15th century until 1787 and is one of the most important historic sites in Prague’s Jewish Town.