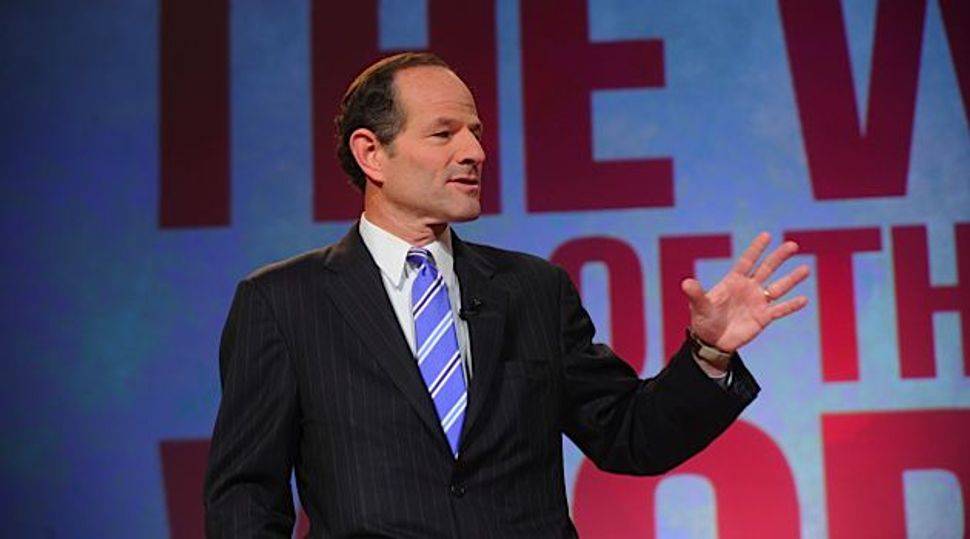 Former New York Governor Eliot Spitzer, who is attempting a political comeback five years after resigning from office in a prostitution scandal, is leading the race to be New York City’s next comptroller, according to a poll released on Wednesday.

Spitzer’s reputation as the “Sheriff of Wall Street” was eclipsed in 2008 by the scandal that earned him the tabloid moniker, “Love Guv.” He startled the city’s political establishment on Sunday when he announced he was launching a campaign.

With two months to go before the Sept. 10 Democratic primary, Spitzer is leading Manhattan Borough President Scott Stringer 42 to 33 percent, according to the NBC 4 New York/Wall Street Journal/Marist poll.

Spitzer has said he wants to reinvent the position of comptroller by taking a more activist role, similar to the financial watchdog position he carved out in two terms as state attorney general, a role that he used as a springboard to the governor’s mansion.

Just over a year after taking office, Spitzer was caught on a wiretap talking to an escort service to arrange a date with a prostitute. He resigned almost immediately, but was never charged with a crime.

The poll found that 57 percent of Democratic voters think he would do a good job.

Two-thirds of Democratic voters said Spitzer deserves another chance, while roughly the same number say the scandal should matter little or not at all, according to the poll, which was conducted on Monday and Tuesday and gives the first indication of what New York’s Democratic electorate thinks of the race.

While Spitzer’s return to public life has long been predicted, the timing of his announcement took the city by surprise. Just last week, Stringer was seen as the likely victor.

But the poll found that Spitzer enjoys a favorability rating of 46 percent among Democrats, while 43 percent of Democrats had either never heard of Stringer or were unsure what they thought of him.

Spitzer’s candidacy also complicates the fortunes of another politician who was hoping this would be his comeback year. Just six weeks ago, former Congressman Anthony Weiner, who resigned from office two years ago after admitting he had sent lewd pictures of himself to women, launched a campaign for mayor of New York City.

When asked whose scandal was worse, voters were almost evenly divided. Just 13 percent said neither was offensive.

The poll of 536 registered Democrats has a margin of error of plus or minus 4 percentage points.