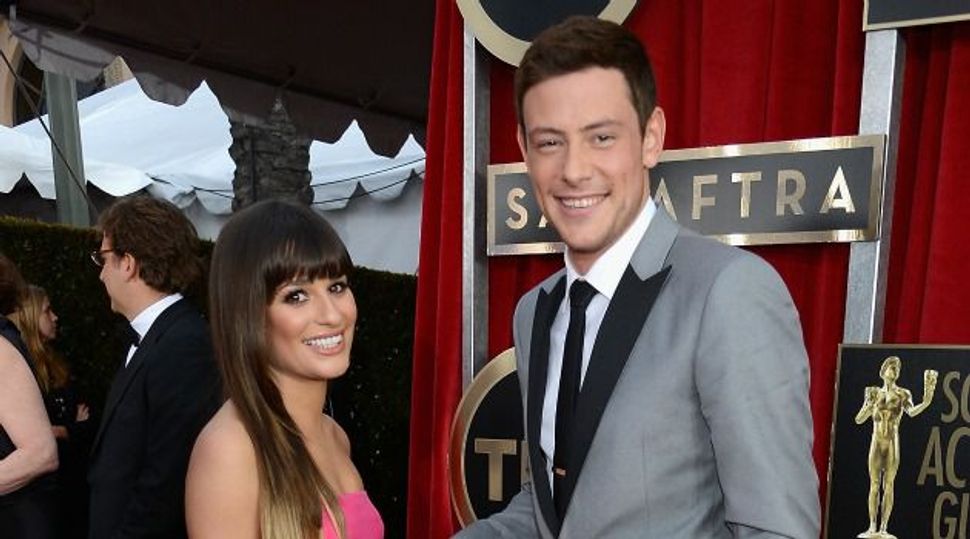 Better Days: Lea Michele and Cory Monteith dated on and off the small screen. Image by getty images

Actress Lea Michele, the Jewish star of ‘Glee,’ was reportedly left “devastated” by the news that her boyfriend, Canadian actor Cory Monteith, died over the weekend.

“She is devastated,” a friend told the Daily News. “She was shaking when she heard the news.”

Police and paramedics found no signs of foul play and the cause of death was not immediately apparent, British Columbia Chief Coroner Lisa Lapointe told reporters at a news conference.

Michele, the Jewish ‘Glee’ star, dated her fellow star Monteith, who had talked about his problems with substance abuse.

Michele, who describes herself as a “Streisand worshiper” on her Twitter page, hasn’t posted anything since Saturday afternoon.

“We ask that everyone kindly respect Lea’s privacy during this devastating time,” her spokesperson said, according to PerezHilton.com.

In response to a question about whether Monteith died of a drug overdose, Vancouver Police Department acting chief Doug LePard said he would “not discuss anything that we might have found in the room at this time”.

“We only notified family members about an hour ago, so we haven’t even been able to have those conversations with them,” he said.

Monteith, whose “Glee” character Finn Hudson was a high school football player turned enthusiastic glee club singer, was treated at a rehabilitation facility for an unspecified substance addiction this year, according to the Vancouver Sun.

The actor, who grew up in Victoria, British Columbia, told Parade magazine in 2011 about what he called a serious drug problem during his teenage years, and was first treated for addiction at 19.

Other people were in Monteith’s Pacific Rim Hotel room on Friday night but evidence, including fob key entries, indicated he returned to his room by himself early on Saturday and was alone when he died, police said. He was due to check out of the hotel that day.

Monteith had been dead for several hours when his body was discovered by police and paramedics answering an emergency call, Lapointe said.