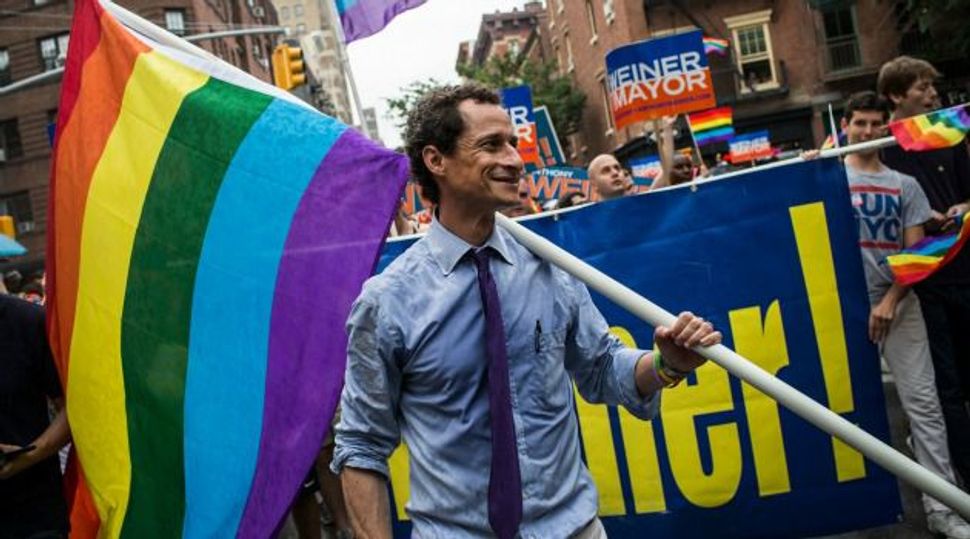 They?re Both Back: Anthony Weiner and Eliot Spitzer have both grabbed leads in their New York comeback bids. Image by getty images

Disgraced politicians Eliot Spitzer and Anthony Weiner are frontrunners in their comeback races, a poll released on Monday showed, with most voters more forgiving about sexual misconduct than financial corruption.

“Notoriety has earned the ‘Tabloid Twins’ … good initial numbers in the polls,” said Maurice Carroll, director of the Quinnipiac University Polling Institute which conducted the survey.

Nearly two months before the September 10 Democratic primary, Spitzer is leading the race for New York City comptroller five years after resigning as the state’s governor in a prostitution scandal.

Weiner, 48, is running for New York mayor two years after a sexting scandal forced him to resign as a congressman.

Spitzer, who shook up the New York political establishment with his 11th-hour bid for the post last week, is leading Manhattan Borough President Scott Stringer with a 15 percent advantage.

Of those polled, 48 percent of registered Democrats said they prefer Spitzer, while 33 percent said they would vote for Stringer.

“While I didn’t take a poll to enter this race, the results of these early polls are gratifying,” Spitzer, 54, said in a statement.

Spitzer became New York governor in January 2007 after serving as the state’s attorney general for 7 years. His aggressive campaign against white collar crime earned him the nickname “Sheriff of Wall Street.”

Weiner’s race for mayor, which he announced in May, is backed by 25 percent of registered Democrats. City Council Speaker Christine Quinn, the early frontrunner and a close ally of Mayor Michael Bloomberg, trails with 22 percent, the Quinnipiac poll showed.

Weiner, who had represented parts of Brooklyn and Queens for six terms, resigned after admitting he had sent a lewd picture of himself over Twitter and then lied about it repeatedly. He did not return calls for comment.

The poll found that strong support among black voters propelled both Weiner and Spitzer to the frontrunner position in their respective races.

About 61 percent of black Democrats favor Spitzer, compared with 26 percent for Stringer. Among white voters, Stringer leads with 44 percent, versus 36 percent for Spitzer.

“They are better known than their opponents and some of what we’ve seen at this point is name recognition,” said Hunter College Professor Kenneth Sherrill. “There is some indication that African American voters are in fact more forgiving than other voters and this might be another case of it.”

The poll also showed that 69 percent of respondents thought financial impropriety was a worse offense for an elected official than sexual misconduct, which was considered more offensive by 22 percent.

“That is not surprising, because in the eyes of voters money in politics is more corrupt than sex in politics,” said Professor Julian Zelizer of Princeton University. “Voters don’t like sex scandals but they don’t matter to their daily lives, while financial improprieties matter to them.”

As recently as February, most city-wide polls had Quinn, who would be the city’s first female and openly lesbian mayor, leading the race to City Hall with nearly 40 percent of Democratic support.

The survey of 738 New York City registered Democrats was conducted last week and had a margin of error of plus or minus 3.6 percentage points.