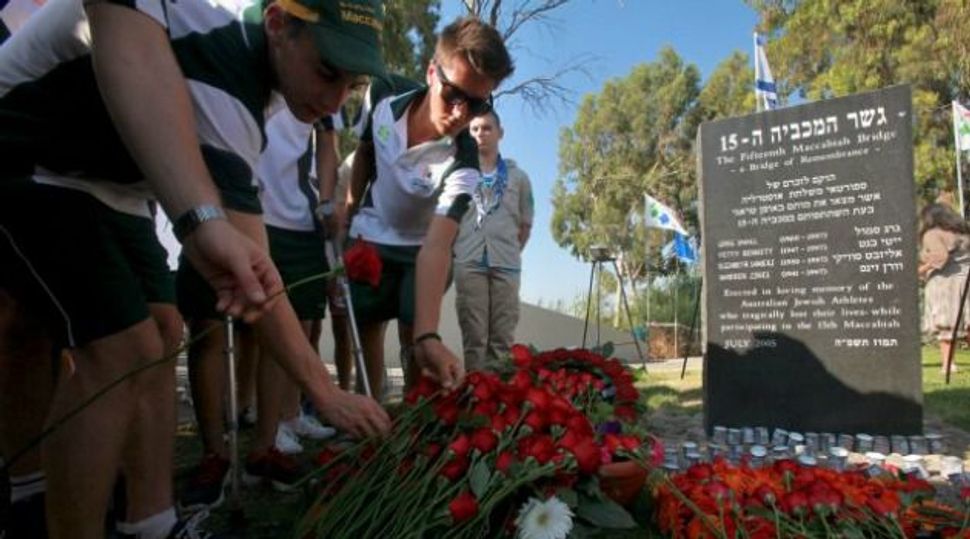 Who?s Responsible? Mourners place flowers on grave of those killed in the 1997 bridge collapse at the Maccabiah Games in Australia. Image by haaretz

Greg Small, Yetty Bennett, Elizabeth Sawicki, and Warren Zines died after a makeshift bridge over the Yarkon River collapsed as the Australian team was making its way into Ramat Gan stadium for the opening ceremony of the 15th Maccabiah in July 1997. More than 70 others were injured.

Five men were found guilty in 2000 of criminal negligence, including Yoram Eyal, the chairman of the organizing committee of the ill-fated Games. He was sentenced to six months’ community service, infuriating many Australian Jews, and was later appointed an executive board member of Maccabi World Union, which organizes the Games. Eyal soon became general manager of the Maccabiah village, the headquarters of MWU and a nerve center of the “Jewish Olympics” – a post he retains to this day.

His colleague, Ronald Bakalarz, then president of the Maccabi World Union, resigned in 2000 following three years of pressure from Australia and an ultimatum by the Knesset inquiry. Today, he is chairman of the board of the Maccabiah village.

Colin Elterman’s daughter Sasha, then a 15-year-old tennis player from Sydney, miraculously survived 28 brain operations after she ingested toxins from the polluted river.