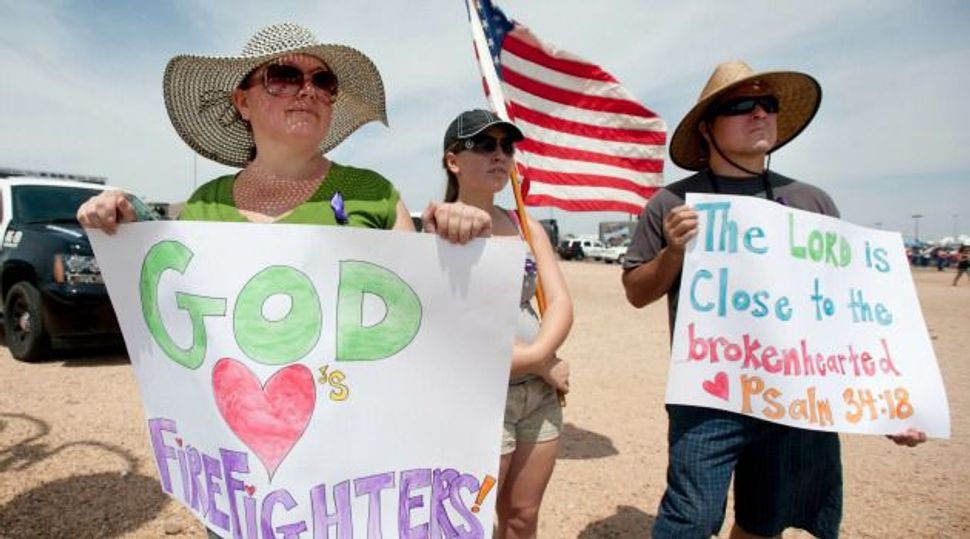 River of Tears: Jews have joined memorials for the 19 Arizona firefighters who died battling forest fires. Image by getty images

Joining the grief felt across the Southwest, the Phoenix Jewish community last week held a solemn tribute to the nineteen Arizona firefighters who perished on June 30, the Jewish News of Greater Phoenix reported

Batsheva and Hofit Hayat, the mother and widow of Israeli firefighter Danny Hayat, who died battling forest fires in Mount Carmel in 2010, flew in from Israel to attend the event.

Batsheva Hayat addressed the assembled community member, offering her sympathies and speaking of the shared values of firefighters worldwide.

“[Danny] believed that his purpose in life was to save human beings, and [the fallen 19] had the same trait,” she said.

Rabbi Jessica Rosenthal, of Temple B’rith Shalom in Prescott, told the paper that “most of us, we are in shock. Prescott is a small town.”

The Jewish Community Association of Greater Phoenix also joined with the United Phoenix Fire Fighters Association to raise funds to support the families of those who died in the fires.