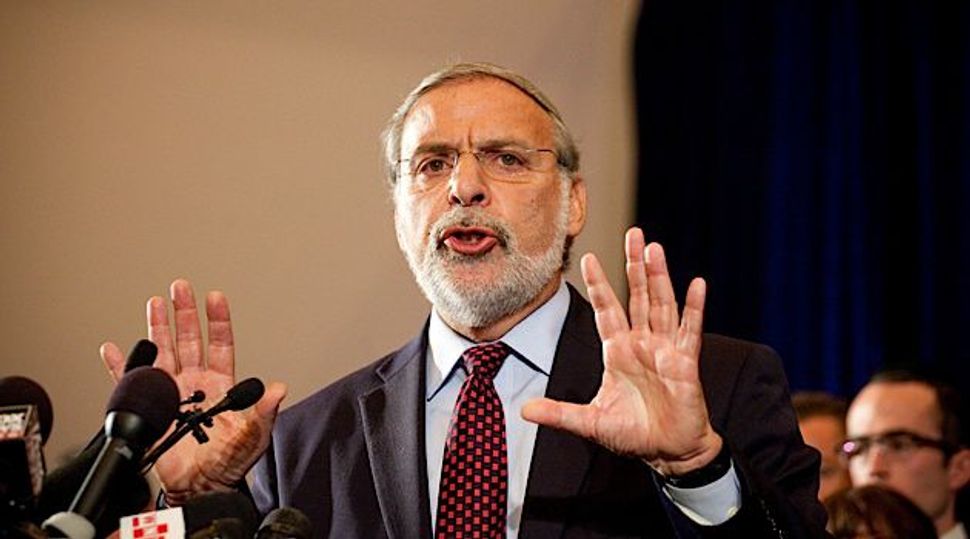 This article originally appeared in the Forverts and was translated by Frimet Goldberger.

In 2010, Kellner, a Munkacs Hasid, reported that his son had been sexually molested by Rabbi Baruch Lebovits, a local cantor and travel agent, but was then, in turn, himself accused of bribing and extorting witnesses — allegations that now appear to be false.

“The charges against Sam Kellner seem to be based on a Yiddish tape that was presented to the DA’s office by Lebovits’ son,” Hikind declared. “But it now seems clear that this tape in Hungarian Yiddish, which I’ve listened to, was mistranslated. Without this tape, there’s no smoking gun. Moreover, reports from reliable sources indicate that prosecutors have told the trial judge that their key witnesses are unreliable. No evidence? No witnesses? What is the DA waiting for?”

According to the Gothamist, Hynes’s spokesman, Jerry Schmetterer, has stated: “We intend to take this case to trial.”

This past Thursday, a group of activists supporting victims of sexual molestation gathered outside Hynes’s office on Jay Street in Brooklyn, demanding he drop the charges against Kellner.

Chaim Levin, a 24-year-old activist from Crown Heights and himself a victim of sexual abuse as a child, organized the protest. During an interview with the Forverts, Levin remarked that it was very important to show support for Kellner in this difficult time.

“This is a father who went to the police seeking justice for his son, which is more than my parents did,” Levin said.

Sam Kellner is accusing Baruch Lebovits of sexually molesting his son, as well as other young boys in the Hasidic community.

In 2010, Lebovits was found guilty on 8 out of 10 counts of child sexual molestation and sentenced to 10 ½ to 32 years in prison. He was freed in 2011 on a technicality. A new trial was ordered, but the date has yet to be set.

Several months after Lebovits’ conviction, Hynes accused Kellner of trying to extort money from Lebovits’ family, and blackmailing witnesses to testify against Lebovits.

It now appears that the charges against Kellner came from Baruch Lebovits’ own family and lawyers. According to several articles by Hella Winston for the Jewish Week, and a report in the New York Times, the statements made by the key witness against Kellner had gross inconsistencies. The witness also acknowledged that community activist Zalmen Ashkenazi – one of Lebovits’ supporters — has paid for his flights to and from Israel, as well as his school fees, lawyer’s fees and rent.

The DA has confirmed that Lebovits’ attorney tried to obtain a plea deal on charges related to the witness, but the prosecutors rejected it, Winston reported. Kellner’s lawyers now believe that the efforts of Lebovits’s defense team to negotiate a plea deal is a sign that they too may suspect that Lebovits might have manipulated the witness, and that Kellner might not have blackmailed him.

Kellner is “paying a really big price for what he did and we need to stand up for him,” Levin says.

Levin, the founder of a website, “Gotta Give ‘Em Hope,” himself recently won awarded 3.5 million dollar by the court in a case against his first cousin, who molested him over the course of many years. Israeli prosecutors are also looking into allegations that the cousin molested him during a family trip to Jerusalem in 1999.

“The DA’s actions are not only shocking, but also set a terrible precedence for others,” Levin said. “Instead of pursuing Lebovits, who everyone knows is a threat to children, they’re going after Kellner. In the meantime, Kellner has lost everything – his community, his house, and his job.”