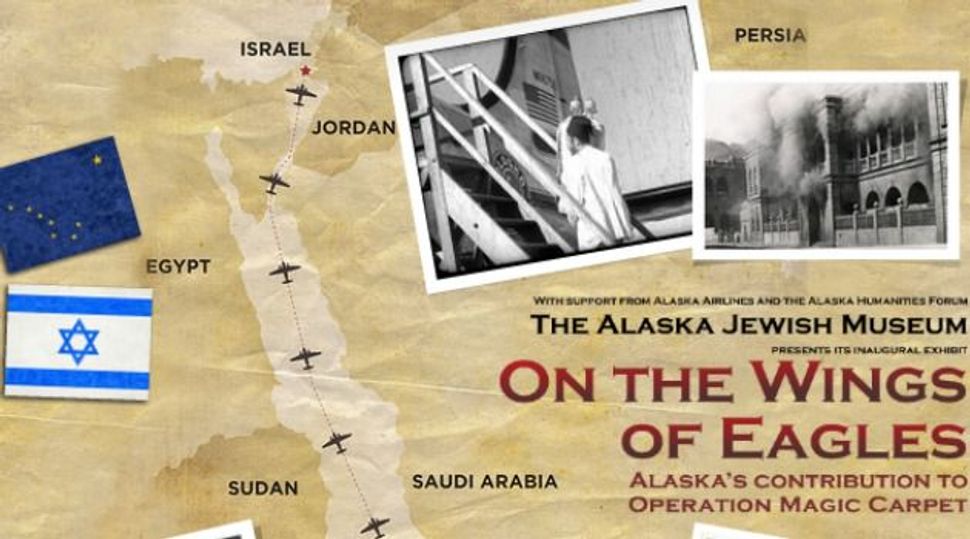 Northern Exposure: The first exhibit at the new Jewish museum in Alaska focuses on Operation Magic Carpet, which brought 50,000 Yemeni Jews to Israel. Image by courtesy of alaska jewish museum

Alaska opened its first Jewish museum with the dedication of the Esformes Jewish Campus of Alaska in Anchorage, the state’s largest city.

Led by Rabbi Yosef Greenberg and his wife Esty, a group of Alaskan Jews conceived of the project in 2004 and in 2007 arranged for Chicago philanthropists Morris and Delicia Esformes to match donations.

According to a report on Lubavitch.com, several prominent members of Alaska’s Jewish community also pitched in to raise the $4 million needed to buy a building for the campus and much of the $2.5 million needed for renovation. In addition to an early education program and Chabad center, the campus is home to the Alaska Jewish Museum and Cultural Center.

“This is a museum about Alaska’s contribution to Jewish life and about the contribution of Jews to Alaska,” Greenberg said.

“On the Wings of Eagles,” the museum’s opening exhibit, tells the story of the role Alaska Airlines pilots played in Operation Magic Carpet. In that operation, which last from June 1949 to September 1950, 49,000 Yemenite Jews were brought to Israel.