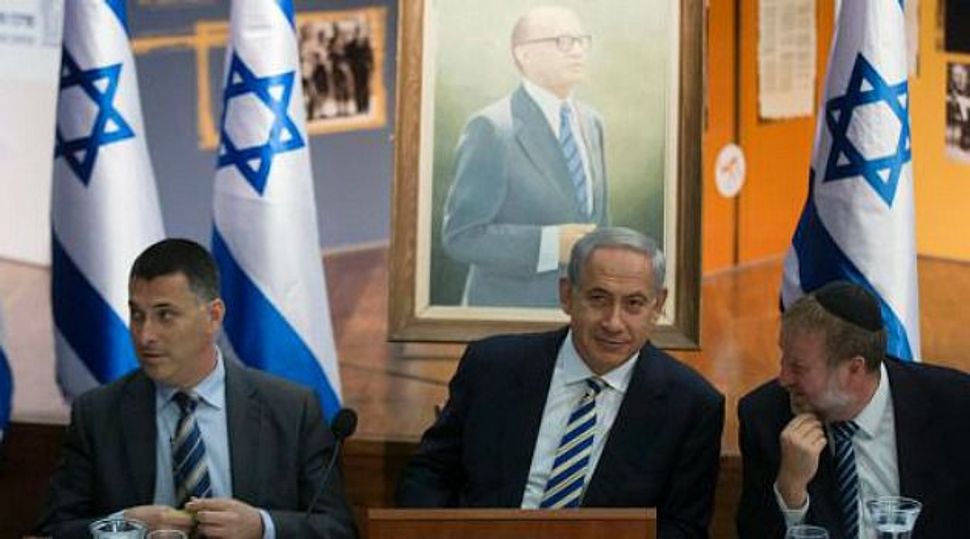 Netanyahu’s plan seemed to cast some doubt on how soon U.S. Secretary of State John Kerry might be able to relaunch talks stalled since 2010, with neither Israel nor the Palestinians having agreed to renew them, in spite of his announcement of a breakthrough on Friday.

An Israeli official, speaking on condition of anonymity, said late on Sunday that no date had been set for sending negotiators to Washington, confounding Kerry’s expectations that talks there could begin “within the next week or so”.

Before negotiations resume, Netanyahu would first ask his cabinet “to empower him to renew the diplomatic process with the Palestinians”, the Israeli official said.

The official said it had yet to be determined whether the full cabinet would vote on Kerry’s proposals at its next session on July 28, or whether a smaller security cabinet would debate the matter later this week.

The Israeli leader would also seek cabinet authorisation to answer Palestinian demands for a release of dozens of prisoners as a goodwill gesture, with a plan to free them in a four-stage process lasting over nine months, the official said.

Palestinians have demanded that Israel free inmates held from before a 1993 interim peace accord. Right-wing Israelis oppose such a step because many of these prisoners were jailed for attacks in which Israelis were killed.

Netanyahu will seek to overcome the objections of far-right ministers to a prisoner release and to yielding land captured in a 1967 war to the Palestinians for a state, by presenting the talks proposed by Kerry “as a strategic process to tighten relations with the United States,” the official said.

He would hope to persuade ministers of the importance of sticking close to Washington to cope with the threats posed by Iran’s development of nuclear weapons and spreading civil strife in Syria and Egypt, the official said.

Netanyahu has pledges from the centre-left Labour party in the opposition to support any peace moves should any cabinet members rebel and bolt his coalition.

The Israeli leader has already pledged to seek a popular vote for any agreement involving territorial concessions. The official said Netanyahu would seek to have legislation passed that would force such a popular vote to be held.

Palestinian President Mahmoud Abbas has also not formally agreed to terms for relaunching talks with Israel and has pressed for more explicit guarantees that Israel would negotiate a withdrawal based on borders from before the 1967 war.

The on-again-off-again negotiations have spread across years and last broke down in 2010 in a dispute over Jewish settlement construction on land Palestinians want for a state.

At the end of his sixth peace shuttle to the Middle East in four months, Kerry announced on Friday that the sides had laid the groundwork for a breakthrough, although details of how talks may resume were still being “formalised.”

Netanyahu’s pro-settler governing partners have ridiculed the efforts and hinted that they may seek to scuttle the process.

Transport Minister Yisrael Katz of Likud mocked Abbas, whose U.S.-backed administration holds sway in the occupied West Bank while the Palestinian enclave of Gaza is controlled by Islamist Hamas rivals opposed to co-existence with Israel.

“Just as no one would consider ceding any territory to Assad in the current situation, so certainly no one is thinking seriously of ceding territory to Abu Mazen at time when he doesn’t completely rule over most of the Palestinian population.”