Israelis and Palestinians Disagree on Format of Washington Peace Negotiations 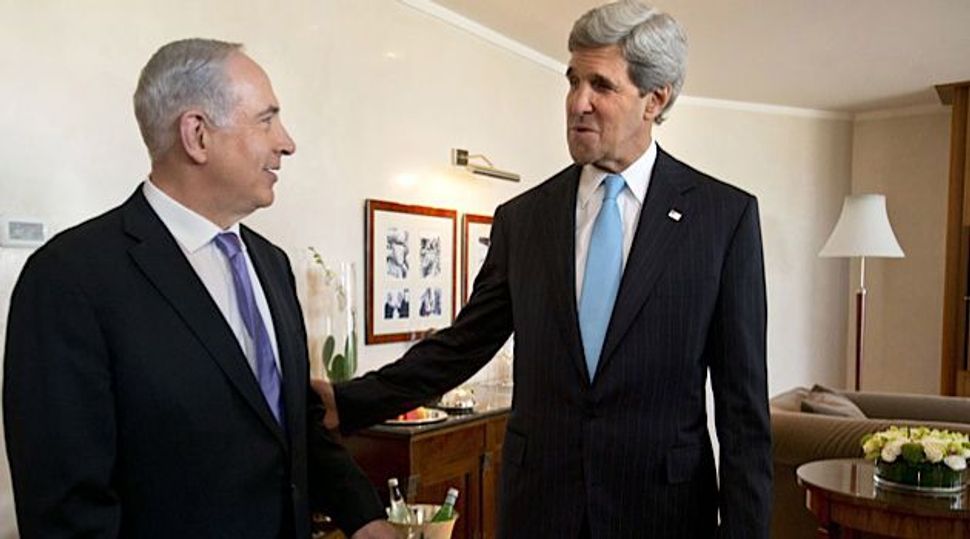 Israeli and Palestinian officials put forward clashing formats for peace talks due to resume in Washington on Monday for the first time in nearly three years after intense U.S. mediation.

U.S. Secretary of State John Kerry is due to bring the negotiators together in the evening and on Tuesday to renew talks that broke down in 2010 over Israel’s settlement of occupied land where Palestinians seek a state.

Previous attempts to resolve the decades-old conflict had sought to ward off deadlock and the risk of knock-on violence by tackling easier disputes first and deferring the most emotional ones like the fate of Jerusalem and Palestinian refugees.

This time “all of the issues that are at the core of a permanent accord will be negotiated simultaneously”, Silvan Shalom, a member of Israeli Prime Minister Benjamin Netayahu’s cabinet and rightist Likud party, told Israel’s Army Radio.

The Palestinians, with international backing, want their future state to have borders approximating the boundaries of the West Bank, adjacent East Jerusalem and the Gaza Strip before Israel captured them in the 1967 Middle East war.

Yasser Abed Rabbo, a top official in Palestinian President Mahmoud Abbas’s umbrella Palestine Liberation Organisation, said the U.S. letter of invitation to the Washington talks had not specified which disputes were to be discussed.

But Abed Rabbo told Voice of Palestine radio the talks “will begin, in principle, on the issues of borders and security”.

Netanyahu had resisted Abbas’s calls to accept the 1967 border formula before talks resumed. Shalom said that the Israeli position would help keep the talks, which are slated to last nine months, comprehensive.

“Had the matter of borders and territory been given over, what incentive would they (Palestinians) have had to make concessions on the matter of refugees or Jerusalem?” Shalom asked.

Israel deems all of Jerusalem its capital – a status rejected internationally – and wants to keep West Bank settlement blocs under any peace accord. It quit Gaza in 2005 and that enclave is now ruled by Hamas Islamists hostile to the Jewish state and opposed to Abbas’s peace strategy.

Palestinian refugees from the 1948 war at Israel’s founding, along with millions of their descendants, claim the right to return to their original homes in what is now Israel. The Israelis rule that out as demographic suicide, saying the refugees should resettle in a future Palestine or elsewhere.

Netanyahu says any peace accord must safeguard Israel, which has often clashed with Hamas in Gaza and fears the Islamist movement could gain ground in the West Bank. Kerry has also described Israel’s security as “paramount”.

Abed Rabbo said Israel and the United States had been conferring about security without including the Palestinians.

“This is a big shortcoming in the Israeli and the American behaviour because they are not discussing their bilateral security, they are discussing a central and a fundamental issue of ours and it concerns our future as a whole,” he said.

After months of intensive and discreet mediation, Kerry announced on July 19 in Amman, Jordan, that the parties had laid the groundwork to resume negotiations on the so-called “final status” issues that must be resolved to end the dispute.

“The meetings in Washington will mark the beginning of these talks,” Kerry spokeswoman Jen Psaki said. “They will serve as an opportunity to develop a procedural work plan for how the parties can proceed with the negotiations in the coming months.”

In what it dubbed a goodwill gesture required to restart diplomacy, the Israeli cabinet on Sunday approved the release of 104 long-serving Palestinian security prisoners in stages. Thousands more Palestinians remain in Israeli jails.

Israelis and Palestinians Disagree on Format of Washington Peace Negotiations