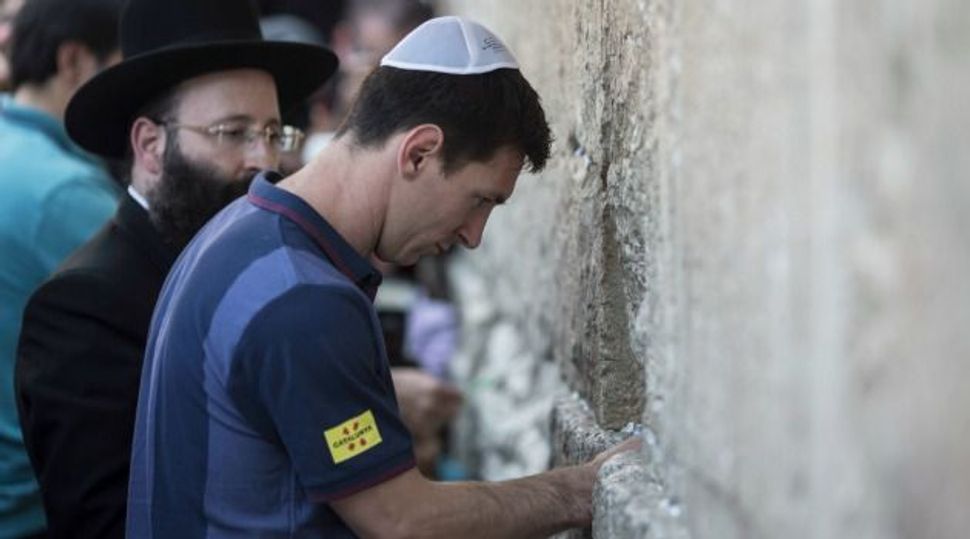 Messi was in Israel with the Spanish soccer team Football Club Barcelona as part of the team’s “Peace Tour,” which included hosting skills clinics and games with Israeli and Palestinian children in order to promote peace.

The Barcelona team arrived Saturday and traveled to the West Bank to meet with Palestinian leaders and children.

On Sunday, the team donned yarmulkes to visit the Western Wall. While in Jerusalem they posed for a group photo with Jerusalem Mayor Nir Barkat. The team also met at the President´s Residence in Jerusalem with Israeli President Shimon Peres and Prime Minister Benjamin Netanyahu.

“It’s a great honor to host Barcelona in a holy city like Jerusalem, with this visit a dream come true for Israeli and Palestinian children. They have two dreams: To score in Camp Nou (FC Barcelona’s soccer stadium) and peace between the two sides. Messi, Xavi, Iniesta and the rest of the players, I hope you teach us the tiki-taka style so that we learn how to score a goal for peace,” Peres said.

One month ago Messi sent a message to the Argentinian Maccabia team. “Very good luck to all of the team members participating in the games in Israel,” said Messi in a prerecorded video, aired in a farewell ceremony held in Buenos Aires.

Messi also participated in 2011 in a campaign for justice and memory of the victims of the 1994 AMIA Jewish center bombing.