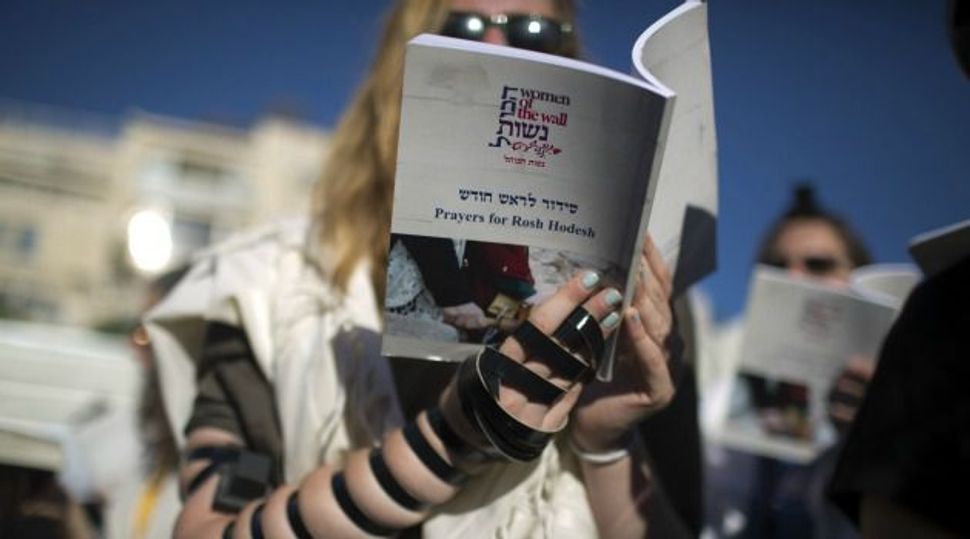 Women of the Wall blew a shofar at the back of the Western Wall Plaza and raised a Torah scroll at the plaza’s gate as they completed their service under a heavy police barricade.

Women of the Wall gathers at the beginning of each Jewish month for a women’s Rosh Chodesh prayer service at the Western Wall. Members had been arrested in the past for wearing prayer shawls due to a law forbidding any practice that falls outside of the wall’s “local custom.”

In April, a judge determined that the group’s activities did not contravene the law. Since then, none of the women has been arrested.

As in recent months, thousands of mostly haredi Orthodox girls and young women packed the plaza adjacent to the wall and prayed quietly during Wednesday morning’s service, while police barricaded Women of the Wall at the back of the plaza, facing the wall but distant from it.

A heavy police barricade, with up to six layers of fencing, a 15-foot buffer zone and two lines of police, separated the estimated 300 women and their male supporters from a crowd of mostly haredi Orthodox protesters who blew whistles, screamed and chanted insults. In the men’s section of the plaza, a man chanted prayers and psalms into a megaphone, disrupting the women’s service.

Last month, the women were barricaded in the plaza’s corner, far from the wall and next to a public restroom. Women of the Wall have not been allowed to bring a Torah scroll into their monthly service, but before entering the plaza, the group sang together as one woman held a scroll aloft at the plaza’s gate.

Recent months have seen a new status quo develop at the wall during Women of the Wall services. Orthodox girls arrive en masse and pray quietly next to the Wall. Police place Women of the Wall under a heavy barricade, and protesters try to interrupt them.

While the protest at May’s service was raucous and violent, Wednesday’s was relatively tame, if dissonant. By the time Anat Hoffman, the group’s chairwoman, blew the shofar, most of the protesters had dispersed.

Following the service Hoffman said in a statement: “We will not forget that the Torah is exiled from the Western Wall, due to the discriminatory misuse of power by Rabbi Rabinowitz. Israel is the only democracy in the world that by law prohibits women from reading Torah. Unfortunately, the only people who felt at home today at the Kotel were the ultra-Orthodox worshippers and the police, and Rabinowitz collaborated towards this end.”