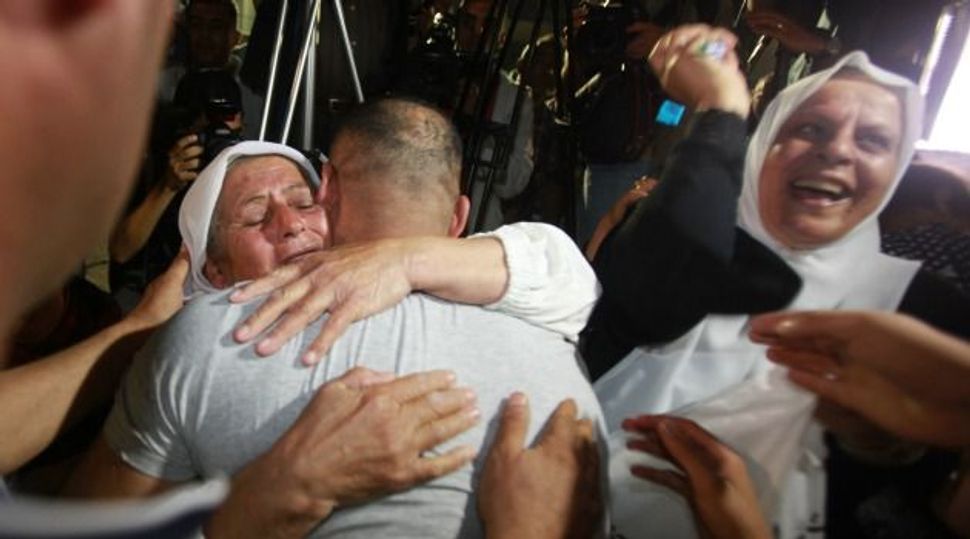 Free at Last: One of 26 Palestinian prisoners receives a welcome from relatives in Ramallah after being released by Israel on the eve of new peace talks. Image by getty images

Israel freed 26 Palestinian prisoners on Wednesday to keep U.S.-sponsored peacemaking on course for a second round of talks, but diplomacy was dogged by Israeli plans for more Jewish homes on occupied land the Palestinians claim for a future state.

Negotiators are due to convene with little fanfare later on Wednesday in Jerusalem, the holy city at the heart of the decades-old conflict of turf and faith. The envoys held first talks in Washington last month, ending a three-year stand-off.

Paving the way for the continuation of negotiations, Israel released an initial number of Palestinians serving long jail terms, many for deadly attacks on Israelis, bussing them in the dead of night to the occupied West Bank and Gaza Strip.

They were welcomed by hundreds of Palestinians including President Mahmoud Abbas, who kissed some of the men and flashed victory signs.

“We congratulate ourselves and our families for our brothers who left the darkness of the prisons for the light of the sun of freedom. We say to them and to you that the remainder are on their way, these are just the first,” Abbas told the crowd in the West Bank capital of Ramallah, where 11 ex-prisoners arrived.

The other 15 went to Gaza, a territory under the control of Abbas’s Islamist Hamas rivals, and were received by relatives who set off fireworks and shot guns into the air in celebration.

“I never expected to see him again. My feelings cannot be described in words, the joy of the whole world is with me,” said Adel Mesleh, whose brother Salama Mesleh was jailed in 1993 for killing an Israeli. “I am happy he was freed as a result of negotiations. Negotiations are good.”

Despite anger from the families of some victims, Israel has promised to free a total 104 inmates in the coming months.

Negotiations are set to continue every few weeks in venues including Jericho in the occupied West Bank, in pursuit of U.S. Secretary of State John Kerry’s goal of a deal in nine months.

Israel says it supports this timeline but in the past few days has rattled world powers by announcing plans to increase its settlement of the West Bank and East Jerusalem, where, along with the Gaza Strip, the Palestinians seek statehood.

Few see swift resolution to longstanding problems such as borders, settlements, the status of Jerusalem and Palestinian refugees. Yet neither Abbas nor Israeli Prime Minister Benjamin Netanyahu wants blame for putting brakes on the U.S. peace bid.

Violence simmered overnight, with the Israeli military bombing what it described as rocket silos in Gaza in retaliation for a rocket launch into Israel. There were no casualties.

Israel quit Gaza in 2005 but wants to keep East Jerusalem and swathes of West Bank settlements, seeing them as a security bulwark and the realization of a Jewish birthright to biblical land. Most world powers deem the settlements illegal.

Speaking to reporters in Brazil on Tuesday, Kerry said he had a “very frank and open, direct discussion” in a phone call with Netanyahu.

Kerry appeared to associate the new settlement announcements with internal Israeli politics, saying “there are realities of life in Israel that have to be taken into account here”.

Such construction helps mollify pro-settler factions in Netanyahu’s rightist coalition government, one of which, the Jewish Home party, opposes Palestinian statehood and tried unsuccessfully to vote down the prisoner release.

Thousands of Palestinians remain in Israeli jails, hailed as heroes by their countrymen while Israel brands them terrorists.

The 104 prisoners had been vetted for release by Yaakov Peri, an Israeli cabinet minister who said on Wednesday that in his former career in the Shin Bet security service he had been involved in capturing and convicting 92 of them.

“This is part of the price of pursuing peace with our neighbors,” Peri told Israel’s Army Radio. “The ramifications of not returning to the negotiating table are dozens of times weightier than releasing the prisoners.”