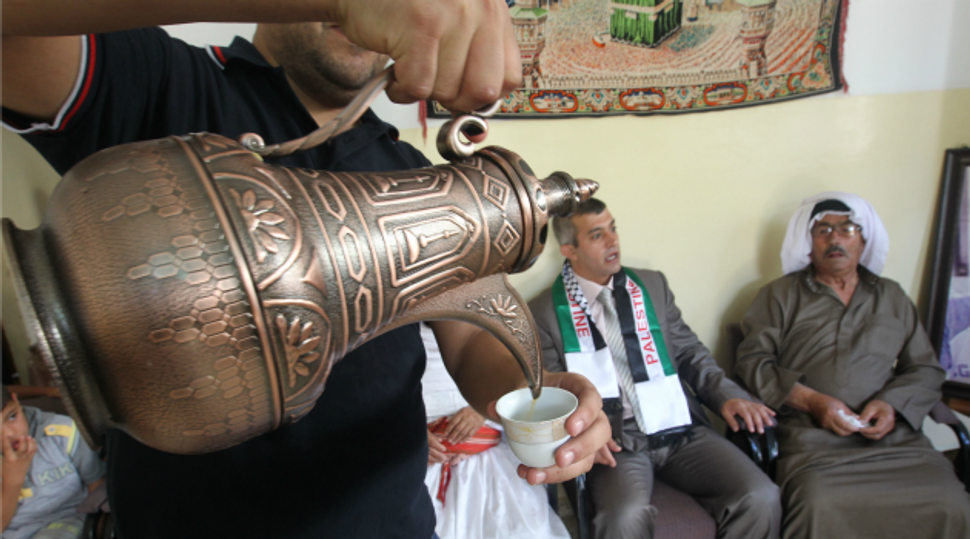 Scant Hope: Palestinians celebrated the release of prisoners held by Israel. But hopes were slim for a rapid breakthrough as peace talks resumed. Image by getty images

The resumption of negotiations, after a first round in Washington last month that ended a three-year stand-off over Jewish settlement building, followed Palestinian celebrations overnight as Israel released 26 of their jailed brethren.

Optimism was in short supply before the two sides’ first official meeting in Jerusalem, a holy city at the heart of their conflict, in nearly five years, with the session expected to focus on setting an agenda for the talks.

“Israel will resort to feints and evasion and put up impossible demands in order to say that these negotiations are fruitless and to continue its policy of stealing land as it has done until this moment,” said Yasser Abed Rabbo, a senior Palestinian official tasked by President Mahmoud Abbas to comment on the talks.

Tzipi Livni, Israel’s chief peace negotiator and justice minister, said on her Facebook page before the teams met: “Today, I will continue the important mission I began – to achieve a peace agreement that will keep the country Jewish and democratic and provide security … for Israel and its citizens.”

Hoping to avoid any public wrangling in the talks on peace and the creation of a Palestinian state alongside Israel, officials have said few details would be released.

Israeli cabinet minister Yaakov Peri said a “long and exhausting trek” lay ahead. U.S. Secretary of State John Kerry has set a goal of nine months for an agreement to be reached.

“Both for the Palestinians and for us, the hourglass is running out. We will not have many more opportunities to resolve this dispute,” Peri told Army Radio.

In the small hours of Wednesday, Israel freed the 26 Palestinians jailed between 1985 and 2001, many for deadly attacks on Israelis. Their release, coupled with Abbas’s dropping of a demand for a settlement freeze before talks could begin, helped to pave the way towards negotiations.

Joyous crowds, fireworks and V-for-Victory signs greeted the former prisoners in the West Bank and Gaza Strip. The scenes did little to boost optimism in Israel about prospects for peace.

“I think that today is a sad day to start negotiating about peace with people who accepted murderers as heroes,” said Erez Goldman, an Israeli resident of Jerusalem. “I cannot see that anyway these peace negotiations are going anywhere.”

Few on either side see swift resolution to longstanding problems such as borders, settlements, the status of Jerusalem and Palestinian refugees.

Yet neither Abbas nor Israeli Prime Minister Benjamin Netanyahu wants to attract blame for putting the brakes on U.S. attempts at peace, a product of Kerry’s intensive shuttle diplomacy. Negotiations are set to continue every few weeks in venues including Jericho in the occupied West Bank.

Israel says it supports Kerry’s nine-month timeline but in the past few days has rattled world powers by announcing its plans to increase its settlement of the West Bank and East Jerusalem, areas it captured along with the Gaza Strip in the 1967 Middle East war.

Israel quit Gaza in 2005 but wants to keep East Jerusalem and swathes of West Bank settlements, seeing them as a security bulwark and the realisation of a Jewish birthright to biblical land. Most world powers deem the settlements illegal.

Nearly 600,000 Israelis live in the West Bank and East Jerusalem, among 2.5 million Palestinians.

Speaking to reporters in Brazil on Tuesday, Kerry said he had a “very frank and open, direct discussion” in a phone call with Netanyahu.

Kerry appeared to associate the new settlement announcements with internal Israeli politics, saying “there are realities of life in Israel that have to be taken into account here”.

Such construction helps to mollify pro-settler factions in Netanyahu’s rightist coalition government, one of which, the Jewish Home party, opposes Palestinian statehood and tried unsuccessfully to vote down the prisoner release.

Despite anger from the families of some victims, Israel has promised to free a total of 104 inmates in the next few months. Thousands of Palestinians, many of them convicted on security-related charges, remain in Israeli jails.

“I never expected to see him again. My feelings cannot be described in words. The joy of the whole world is with me,” said Adel Mesleh, whose brother Salama Mesleh was jailed in 1993 for killing an Israeli. “I am happy he was freed as a result of negotiations. Negotiations are good.”