Growing Number of U.S. Lawmakers Call for Suspension of Aid to Egypt 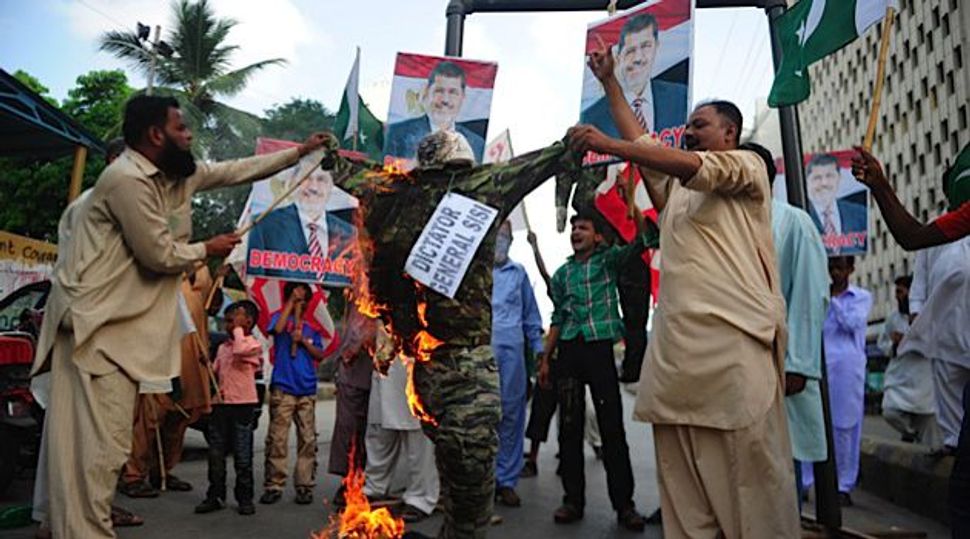 State of Affairs: More and more U.S. lawmakers are calling for a suspension of aid to Egypt where violent protests have taken over the capital city recently. Image by getty images

A growing bipartisan chorus of U.S. lawmakers said on Sunday that the United States should suspend its $1.5 billion in military and economic aid to Egypt following a violent crackdown on protesters that has left nearly 800 dead.

Senator John McCain, a top Republican on the Senate Armed Services Committee, said he now supported suspending the aid, even though he initially believed it should be continued after the Egyptian military removed democratically elected President Mohamed Mursi from office last month.

“I wanted to give (Egypt’s military leaders) an opportunity to do the right thing after the coup had taken place,” McCain said on CNN’s “State of the Union” program. But after the crackdown, aid should be withheld, he said.

Around 800 people have died in three days of violence that has earned Egypt stiff condemnation from Western nations.

President Barack Obama, a Democrat, on Thursday announced that normal cooperation with Cairo could not continue amid the crackdown and announced the cancellation of military exercises with Egypt next month.

But he stopped short of cutting off U.S. aid to Egypt, which lately has been running about $1.55 billion a year, with $1.3 billion of that provided to the military.

The White House declined to comment on Sunday about the growing calls from lawmakers – including some Democrats – for suspending aid.

Untangling the aid relationship with Cairo would not be simple and could be costly for the United States as well as Egypt. A special financing arrangement Cairo uses could leave U.S. taxpayers holding the bill for billions of dollars in equipment Egypt already has ordered on credit, and companies like Lockheed Martin and General Dynamics that build military hardware for Egypt would be affected by aid restrictions.

Also on Sunday, several lawmakers made the point that the security of neighboring Israel and the Suez canal were compelling reasons in favor of continued aid. Since 1979, when Egypt signed a peace treaty with Israel, it has been the second largest recipient, after Israel, of U.S. bilateral foreign aid, the Congressional Research Service says.

At issue, too, is the U.S. relationship with key Gulf Arab states, including Saudi Arabia, Kuwait and the United Arab Emirates, which have promised the military-backed government some $12 billion in financial support.

Saudi Arabia, which fears the spread of Muslim Brotherhood ideology to the Gulf monarchies, pledged $5 billion alone in aid to Egypt after the Islamist Mursi was ousted.

Senator Kelly Ayotte, another Republican member of the Senate Armed Services Committee, said she also had changed her view and believed it was now time to cut off aid.

“With the recent violent crackdown, I do not see how we can continue aid. I believe it must be suspended,” Ayotte said on NBC’s “Meet the Press” program.

There have been calls in the last week from both ends of the U.S. political spectrum for Obama to follow a U.S. law that triggers an aid cutoff if a military coup against a democratically elected government has taken place.

Senator Jack Reed, a Democratic member of the Senate Armed Forces Committee, said Congress should pass legislation cutting off the aid, while giving Obama the flexibility to maintain it if he believes it is in the U.S. national security interest.

“We have to have a policy that expresses our outrage, really, at the military but also gives the president the tools to – we hope – engage them,” Reed told “Meet the Press.”

“Well, look, I think the actions of the last week, no doubt, are going to cause us to suspend aid. And I think it’s at the same time a time for us to recalibrate and look at what is our national interest,” Corker said on ABC’s “This Week” program.

But since most of the aid for the current budget year has already been sent, “What we’re really talking about … is a debate that will take place this fall as we look forward to next year,” Corker said.

Representative Eliot Engel, a top Democrat on the House of Representatives Foreign Affairs Committee, urged caution, saying there were a number of strategic reasons for continuing the aid even though the Egyptian military’s actions were intolerable.

“I think it’s a time to see what the next step should be. Obviously, we cannot let what’s been happening just happen, but I think we have to be careful and not cut off our nose to spite our face. These are very, very difficult choices. I’m very unhappy, obviously, with the crackdown,” Eliot said on ABC’s “This Week.”

Growing Number of U.S. Lawmakers Call for Suspension of Aid to Egypt