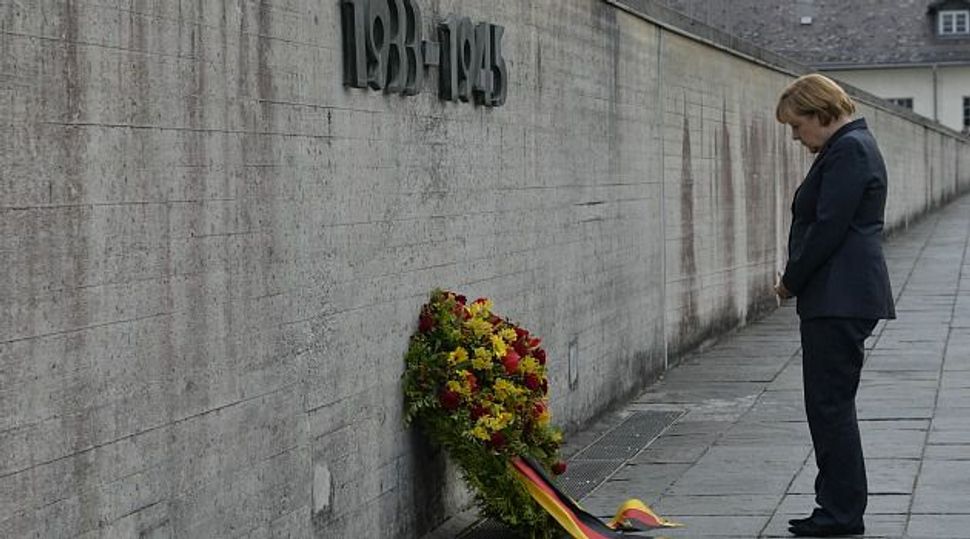 Angela Merkel laid a wreath at Dachau concentration camp on Tuesday, making her the first German chancellor to visit the death camp where Nazis killed more than 41,000 people in the Holocaust.

Taking a pause in her campaign for a third term in office, the chancellor met survivors, including Abba Naor, an 85-year-old Jew whose mother and 5-year-old brother were murdered in concentration camps along with dozens more relatives.

“Merkel is coming here to say we will never forget what happened here,” the Lithuanian-born former inmate said.

The Nazis set up Dachau, near Munich, in 1933, weeks after Adolf Hitler took power, to detain political rivals. It became the prototype for a network of camps where 6 million Jews were murdered, as well as Roma, Russians, Poles and homosexuals.

More than 200,000 people had been detained in the camp by the time U.S. troops liberated it in 1945. Television footage showing piles of bodies and starved inmates in the camp was among the first images the world saw of the Holocaust crimes.

The chilling motto “Arbeit macht frei” (Work makes you free) on the main gate to Dachau still greets the 800,000 annual visitors to the camp, where Merkel spoke to a small group survivors in the camp’s parade ground, surrounded by drab grey barracks and watchtowers.

“The name Dachau is tragically famous as it serves as a model for the concentration camps,” the chancellor said. “The memory of that fate fills me with deep sadness and shame.”

She said she was concerned about ongoing right-wing extremism in Germany, where a small neo-Nazi cell, the National Socialist Underground, is on trial for murdering nine immigrants and a policewoman between 2000 and 2007.

About 15 minutes after the visit to Dachau, Merkel shifted gear and gave a political speech at a campaign event with Bavarian conservatives in a beer tent in the nearby town of the same name, Dachau. She appeared on stage with a brass band whose members were wearing traditional lederhosen and dirndl.

The Bavarian conservatives are key allies in her campaign for re-election in a federal election on Sept. 22, which opinion polls suggest she is likely to win.

From the political opposition, Renate Kuenast of the Greens said it was in “bad taste” for the chancellor to squeeze in a visit to Dachau between her campaign stops in Bavaria.

“Anyone who was serious about commemorating such a place of horror wouldn’t pay such a visit during the election campaign,” the Greens’ parliamentary leader told a Leipzig newspaper.

But leaders of the German Jewish community appeared to disagree with Kuenast. Charlotte Knobloch, a vice-president of the World Jewish Congress who lives in Munich, said Merkel’s visit to Dachau showed her historical awareness and sense of responsibility.

“It’s remarkable that the chancellor changed her plans at the last minute during the hot phase of the election campaign,” said Knobloch, who was born in Munich in 1932 and was saved from the camps by Catholic farmers.

Survivor Naor said the German population would decide whether Merkel was right to make the visit during the campaign.

“Merkel is smart enough to understand and say the right thing at the right time. I heard Merkel say in the Knesset that an attack on Israel is an attack on Germany and I thought she is my chancellor,” he said.

Although Merkel, who visited Dachau as a minister in 1992, is the first federal chancellor to visit Dachau, a German head of state – then president Horst Koehler – attended the 65th anniversary of its liberation three years ago.