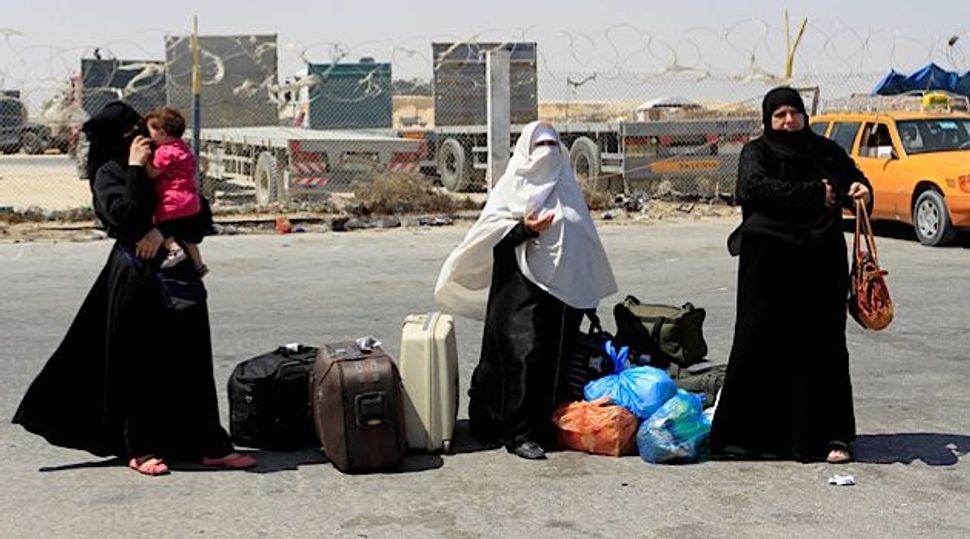 Waiting To Cross: Gaza women stand with their belongs outside of the Rafah border crossing in August, waiting for the checkpoint to be reopened. Image by getty images

Hamas, an off-shoot of the Muslim Brotherhood, has ruled Gaza since 2007 and has an uneasy relationship with Egypt’s new army-backed leadership, which toppled elected President Mohamed Mursi, a Hamas ally, last month.

Cairo has accused Hamas of interfering in Egyptian affairs and suggested that Palestinians might be helping Islamist militants active in the Sinai peninsula, where 25 policemen were killed in an ambush on Monday.

The Egyptian army, which has long been suspicious of Hamas, has also clamped down on smuggling tunnels that run underneath the desert border between Egypt and Gaza.

“The Palestinian people, the people of Gaza, must not pay the price for any problems or differences inside Egypt,” said Ghazi Hamad, deputy foreign minister of the Hamas-run government in the territory.

Mursi’s ouster was seen as a major blow to Hamas, especially as the group’s ties with traditional allies Iran and the Lebanese Hezbollah party have also suffered because it sided with the rebels in the uprising against their one-time friend, Syrian President Bashar al-Assad.

Thousands of Palestinians, including students and patients seeking medical treatment, have been unable to travel to Egypt since the Rafah border crossing was shut.

Hundreds of Palestinians have also been stranded outside the Gaza Strip by the upheaval that has shaken Egypt since the military ousted elected President Mohamed Mursi on July 3 after mass protests against the Muslim Brotherhood leader’s rule.

“Gaza people have enough problems. This crossing should be named the crossing of humiliation and not Rafah,” said Mai Jarada, a business student in Tunisia who attended a wedding in Gaza and now cannot leave the Palestinian enclave.

Some 1,200 Gaza residents used to enter Egypt daily before Mursi’s ouster, but the figure has dropped to only 300 since he was deposed.

At Rafah, the main window to the world for the 1.7 million Palestinians in the Israeli-blockaded Gaza Strip, several dozen people waited in vain on Wednesday to cross the border into Egypt’s Sinai.

Citing security concerns, Israel allows only a limited number of people to travel through its own passenger crossing with the Gaza Strip.

At a news conference on Wednesday, Hamad rejected accusations by some Egyptian officials that Hamas, an Islamist group that is an offshoot of the Muslim Brotherhood, had intervened on Mursi’s behalf during violence in Egypt.

At least 900 people, including 100 soldiers and police, have been killed in a crackdown on Mursi’s Muslim Brotherhood in the past week, the bloodiest civil unrest in Egypt’s modern history.

In a sign of concern over any spillover of anti-Islamist activity into the Gaza Strip, Ismail Haniyeh, prime minister in the Hamas government, made reference at a public event to a YouTube video that urged Palestinians in the territory to rebel against Hamas’s leadership on Nov. 11.

The video showed four masked men, who identified themselves as members of the “Tamarud (Rebellion) of Palestine”. One of the men said Palestinians’ “patience has run out” and Hamas “will not govern us after November 11”.

Haniyeh, in his public remarks, said: “I support rebellion against the Zionist enemy. Such a language must not be used among us.”

Hamas, which won a general election in 2006, seized the Gaza Strip from forces loyal to Western-backed President Mahmoud Abbas’s Fatah movement in 2007. Egyptian-brokered unity talks have failed to lead to reconciliation between the two groups.