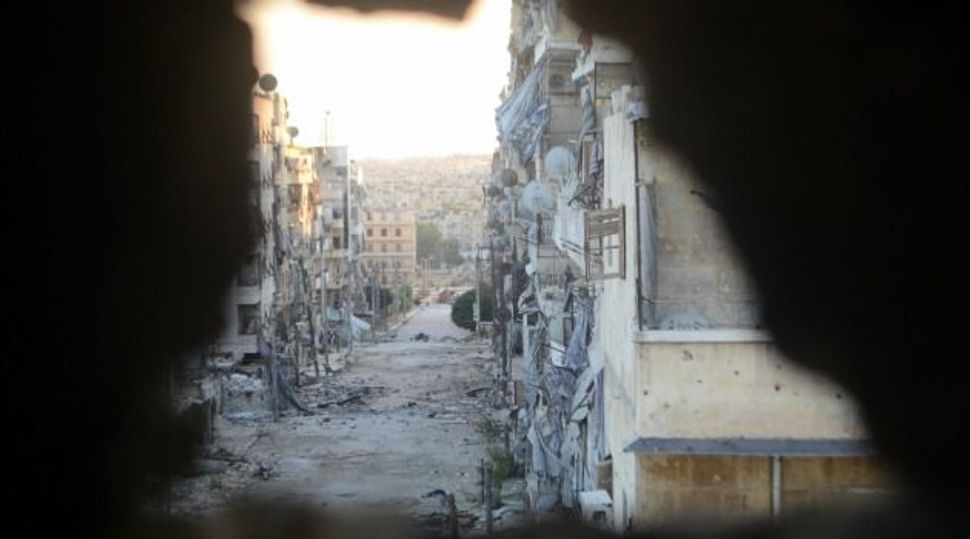 Peek of Destruction: The Syrian city of Alleppo is all but ruined amid the brutal civil war. A ranking Democrat is calling for U.S. air strikes to stop Bashar al-Assad?s attacks. Image by getty images

The top Democrat on the House of Representatives Foreign Affairs Committee urged President Barack Obama on Friday to order air strikes against Syrian President Bashar al-Assad’s government after the apparent gassing deaths of hundreds of civilians.

Representative Eliot Engel cited Obama’s statement that the use of chemical weapons by Assad’s forces would cross a “red line” and cause the United States to act to halt such violations of international law.

“If we, in concert with our allies, do not respond to Assad’s murderous uses of weapons of mass destruction, malevolent countries and bad actors around the world will see a green light where one was never intended,” Engel wrote in a letter to Obama and obtained by Reuters.

Syria denies being responsible and has in the past accused rebels of using gas.

General Martin Dempsey, the chairman of the Joint Chiefs of Staff, wrote to Engel this week saying the United States had the capability to conduct targeted air strikes in Syria to destroy runways, fuel depots and helicopters.

“And, we can do this with no boots on the ground, from stand-off distances,” Engel wrote in his letter to Obama. “I know that your Administration is wrestling with these very complex issues, but I believe that we, as Americans, have a moral obligation to step in without delay and stop the slaughter.”

Engel has been a strong advocate for more aggressive U.S. military intervention in Syria, as have several other members of Congress, including such influential foreign policy voices as Republican Senator John McCain.

But there remains deep opposition and skepticism among some members of the House and Senate – as well as the Obama administration – about any rush to military intervention in Syria.

Obama called the deaths of hundreds of Syrians in an apparent chemical weapons attack a “big event of grave concern,” but stressed on Friday he was in no hurry to embroil Americans in a costly new war.

The United States is providing non-lethal support to the Syrian opposition, but has been slow to make good on promises to deliver weapons to moderates.

In his letter to Engel this week, Dempsey warned of the complexity of choosing sides in Syria and stressed the U.S. intervention would not extinguish the religious, tribal and ethnic tensions fueling the conflict.