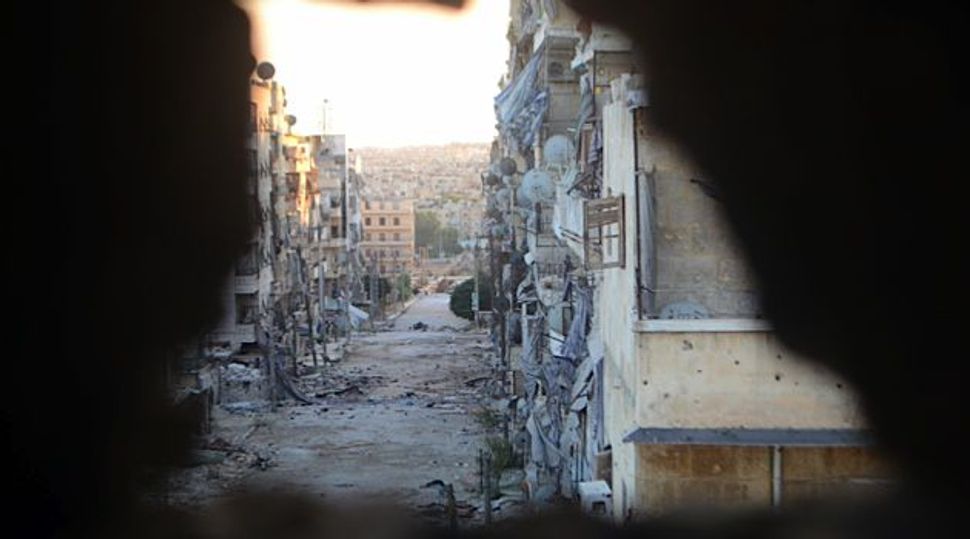 Syria warned the United States against any military action over a suspected chemical weapons attack in its civil war, saying it would “create a ball of fire that will inflame the Middle East”.

A team of United Nations inspectors are waiting in a hotel in Damascus a few miles from the site of the attack, but Syria suggested they would not be allowed to visit as it was not on a list agreed in July of alleged chemical attacks this year.

U.S. President Barack Obama met his top military and national security advisers on Saturday to debate options. U.S. naval forces have been repositioned in the Mediterranean to give Obama the option of an armed strike.

Syria said any military action would be “no picnic”.

“U.S. military intervention will create a very serious fallout and a ball of fire that will inflame the Middle East,” Syrian Information Minister Omran Zoabi was quoted by state news agency SANA as saying to Lebanon-based al-Mayadeen TV.

Obama authorised sending U.S. weapons to Syrian rebels in June but shipments were delayed due to fears that radical Islamist groups in the opposition could gain further ground in Syria and become a threat to the West.

The head of the al Qaeda-linked Nusra Front has pledged to target communities from Syria’s Alawite faith, followed by Assad, with rockets in revenge for Wednesday’s incident, according to an audio recording published on YouTube.

“For every chemical rocket that had fallen on our people in Damascus, one of their villages will, by the will of God, pay for it,” Abu Mohammad al-Golani said in the recording.

Obama has been reluctant to intervene in Syria’s civil war, but reports of the killings near Damascus have put pressure on the White House to make good on the president’s comment a year ago that chemical weapons would be a “red line” for the US.

Iran said any intervention by Washington would have “severe consequences”, according to the Fars news agency.

“America knows the limitation of the red line of the Syrian front and any crossing of Syria’s red line will have severe consequences for the White House,” Massoud Jazayeri, deputy chief of staff of Iran’s armed forces, according to Fars.

Syrian opposition accounts that between 500 and well over 1,000 civilians were killed this week by gas in munitions fired by pro-government forces, and video footage of victims’ bodies, have stoked demands abroad for a robust, U.S.-led response after 2-1/2 years of international inaction on Syria’s conflict.

The medical charity Medecins Sans Frontieres said three hospitals near Damascus had reported 355 deaths in the space of three hours out of about 3,600 admissions with nerve gas-type symptoms.

Major world powers – including Russia, which has long blocked U.N.-sponsored intervention against Assad – have urged the Syrian leader to cooperate with the U.N. inspectors.

But Russia said the rebels were impeding an inquiry and that Assad would have no interest in using poison gas for fear of foreign intervention.

Israeli Prime Minister Benjamin Netanyahu called the deaths in a rebel-held Damascus suburb a “terrible crime” on Sunday but, in a sign Syria’s neighbour fears escalation, avoided any direct call for U.S. military action in his public comments.

A senior U.N. official arrived in Damascus on Saturday to seek access to the site but Syria reiterated on Sunday that it had not yet agreed.

Information Minister Zoabi said Syria and the U.N. had previously agreed on inspections of certain sites around Syria from before Wednesday’s allegations and will not allow any “inspection that will prejudice national sovereignty”.

Syria “will not allow the existence of inspection committees under any pretext, and this position is final,” he said.

Opposition activists in Damascus said the army was using surface-to-surface missiles and artillery to strike eastern Damascus, including neighbourhoods where the alleged chemical attack occurred.

The White House declined to list what options were discussed on Saturday and said Washington was still gathering details about the attack.

“President Obama has asked the Defense Department to prepare options for all contingencies,” U.S. Defense Secretary Chuck Hagel told reporters in Malaysia as he began a week-long trip to Asia.

“We have done that and we are prepared to exercise whatever option – if he decides to employ one of those options.”

Opposition sources said on Sunday four hundred tonnes of arms had been sent into Syria from Turkey – one of the single biggest to reach rebel brigades – to boost insurgent capabilities against Syrian government forces following the alleged chemical strike.

The U.N. says more than 100,000 people have been killed during the Syrian conflict, which started with peaceful protests against decades of Assad family rule but turned into a civil war following a crackdown.