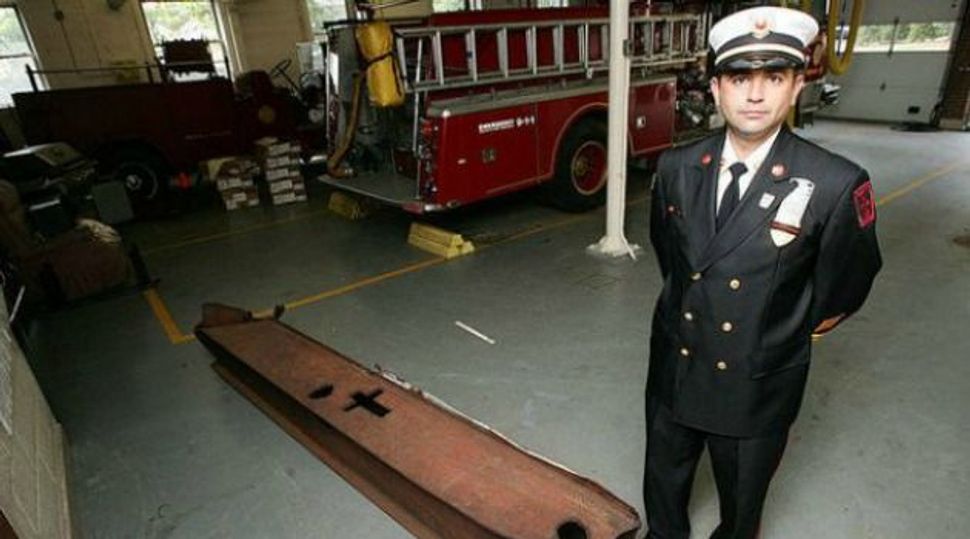 Image by courtesy of times of trenton

A Jewish firefighter in New Jersey who wants to display a beam from the World Trade Center with a Christian cross cut from it is meeting opposition from an atheists’ group.

Roy James, the deputy fire chief in Princeton, requested the beam be used as part of a planned local 9-11 memorial in the southern New Jersey township.

“I’m a Jew,” James told Fox News. “Ironically, I’m fighting to have this cross there because I believe that someone’s story is behind that. That story needs to be told. It has nothing to do with religious faith. It has something to do with telling history.”

The American Atheists organization has threatened to sue Princeton if the beam is put on display. Its president, David Silverman, told Fox News that the beam is a “religious icon” and placing it on public land set aside for the memorial is a “clear violation” of the separation of church and state.

In the days following the attack on the World Trade Center, symbols including Stars of David and crosses were cut into some of the beams from the fallen buildings. It was happenstance that Princeton received a beam with a cross cut in it.

“We got a historic piece,” James said. “There’s so much behind that. If we do not show the cross, we are leaving out someone’s story. We are basically saying someone’s emotions that day didn’t matter.”

The beam is being stored at a Princeton fire station.