AIPAC and Other Jewish Groups Back Strike on Syria 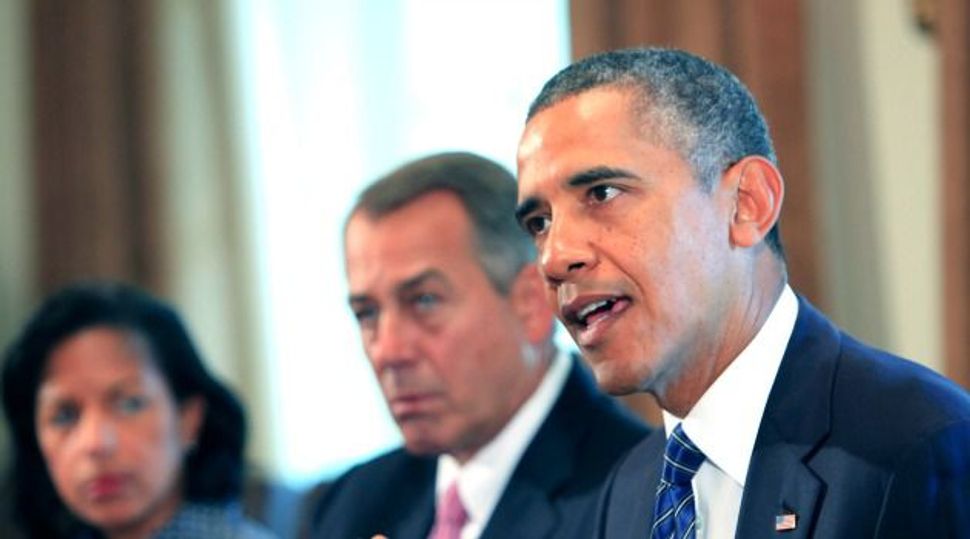 The statements by the American Israel Public Affairs Committee (AIPAC), the Anti-Defamation League (ADL) and the Republican Jewish Coalition (RJC) represented the groups’ most public show of support for U.S. military action since the Aug. 21 attack near Damascus in which Syria’s government is accused of using chemical weapons to kill more than 1,400 people.

During the past two weeks, the groups had been unusually quiet as the Obama administration sought to build a case for limited strikes against Syrian President Bashar al-Assad’s government.

Supporters of the groups and government sources acknowledged that the groups had made it known that they supported U.S. action. But, the sources said, the groups generally want the debate to focus on U.S. national security rather than how a decision to attack Syria might help Israel – a reflection of their sensitivity to being seen as rooting for the United States to go to war.

Even so, in recent days Obama, Secretary of State John Kerry and other administration officials had emphasized that a mission to degrade Assad’s chemical weapons stockpiles would reduce his ability to use them in Syria’s civil war and beyond the county’s borders.

They also argued that if the United States took a stand against chemical weapons in Syria, it would be a warning to Iran, the Hezbollah militant group and others that might threaten the Jewish state.

Failing to act, the administration has argued, would endanger Israel by allowing instability on its borders and emboldening Iran, which Western powers believe is developing nuclear weapons.

It was unclear precisely why the pro-Israel groups issued their statements on Tuesday. But they followed a 45-minute meeting at the White House in which administration officials briefed Jewish groups on how it is framing the debate on Capitol Hill, according to a government source who was not authorized to speak publicly.

In its statement, AIPAC called on Congress to “support the president’s effort to protect American security interests” and “dissuade the Syrian regime’s further use of unconventional weapons.”

“The civilized world cannot tolerate the use of these barbaric weapons, particularly against an innocent civilian population including hundreds of children,” the group said in its statement, which was signed by AIPAC President Michael Kassen and Howard Kohr, the chief executive.

“America must also send a forceful message of resolve to Iran and Hezbollah – both of whom have provided direct and extensive military support to Assad,” the AIPAC officials said.

Israel and groups that support it are particularly sensitive to the use of chemical weapons in light of Adolf Hitler use of deadly gas during World War II. Nearly half of the estimated 6 million Jews killed during the war are widely believed to have been gassed at Nazi prison camps.

In the ADL’s statement, National Chair Barry Curtiss-Lusher and National Director Abraham Foxman said that “any nation that violates international norms and obligations which threaten the peace and security of the world must face the consequences of those dangerous acts.”

And in a statement posted on its web site, the RJC said, “It is imperative that the U.S. preserve its ability to protect a credible military deterrent.”

‘WE ARE NOT INVOLVED’

The cautious approach taken by the pro-Israel groups in the days after the Aug. 21 chemical attack in Syria was similar to that of Israel itself.

Since the rebellion against Assad began in 2011 Israel has not injected itself into Syria’s civil war, a sign that however wary they are of Assad, Israeli officials also are concerned about potential chaos between warring factions in Syria if Assad were ousted.

On Tuesday, Israeli Defense Minister Moshe Yaalon sought to distance Israel from any U.S. decision-making. “We are not involved nor are we getting involved in Syria,” he said. “We reiterate this again and again.”

Several U.S. lawmakers said they had not heard from Israel on the matter of Syria.

“The Israelis will always take care of themselves. They have never asked for our military. They will never ask for anyone to defend them but themselves, and I think that Israel will be just fine,” said New York Representative Eliot Engel, the top Democrat on the House Foreign Affairs Committee.

AIPAC and Other Jewish Groups Back Strike on Syria