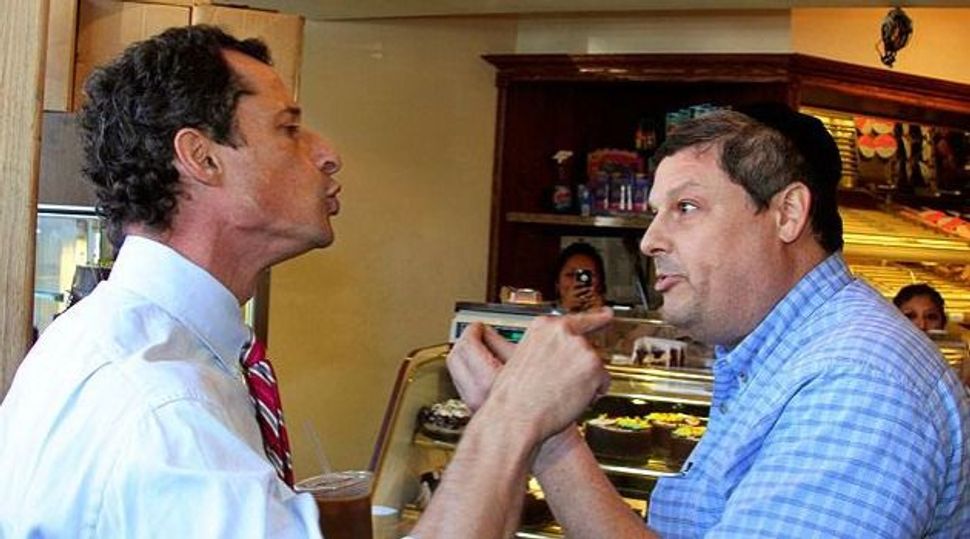 New York Style: Anthony Weiner goes toe-to-toe with heckler who confronted him during a Brooklyn campaign stop. The candidate said the shouting match shows he?s not afraid to ?show emotion? when needed.

Anthony Weiner, who has pressed on with his bid for New York City mayor despite seeing his lead in the polls vanish amid embarrassing revelations, lost his cool while campaigning on Wednesday, a video of the incident showed.

“Yeah, it takes one to know one, jackass,” Weiner is heard calling out over his shoulder as he exited a bakery in Brooklyn, his cheek stuffed with a bite of danish.

Weiner, on the campaign trail ahead of Rosh Hashanah was marking his 49th birthday.

The confrontation, captured by a local blogger and posted online, appeared to center on the lewd-picture scandal that led Weiner to resign from Congress in 2011. After new pictures emerged this summer, his lead in the polls collapsed.

In a new Quinnipiac poll, just 7 percent of likely Democratic primary voters said they would support him.

The shouting match started when a customer at Weiss Family Bakery in Boro Park called Weiner an obscene name and slammed him as “married to an Arab.”

“What rabbi told you that you were my judge?” Weiner, who is Jewish, says in the video clip as he walks back into the bakery.

“You want to believe you’re superior. But you’re not,” Weiner continues. “Where do you get the morality to judge me? Do you know who judges me? Not you. You don’t get to judge me because you have shown no sign you are superior to me, and you are not my God.”

“I think I put him in his place,” Weiner told reporters after the incident in a separate video posted by the website Talking Points Memo. “Just because someone is running for office doesn’t mean you have an unabridged right to say whatever nasty and vile things you want.”

“I think New Yorkers need a leader who will express emotion if it’s appropriate,” Weiner said.