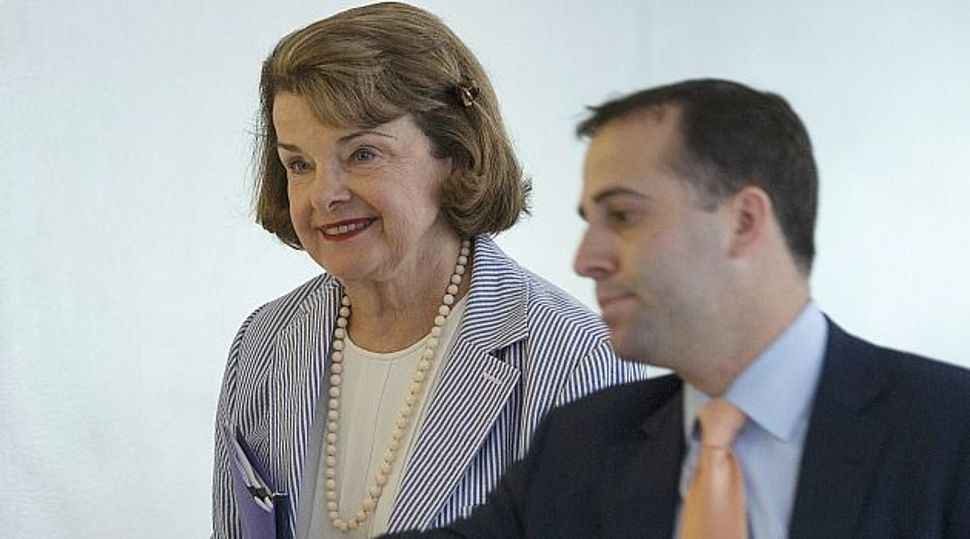 All-Out Push: Sen. Diane Feinstein (D-Calif.) arrives for a briefing on Syria. AIPAC plans a major push to convince Congress to back President Obama?s request to authorize use of force. Image by getty images

AIPAC is putting its bodies where its mouth is on Syria.

The pro-Israel group, having backed President Obama’s push to authorize military strikes against the regime of Bashar al-Assad, plans to dispatch more than 250 leaders and activists to lobby Congress starting early next week.

The hawkish group decided to double down on its support because it sees any sign of U.S. weakness as an invitation to aggression by other enemies of Israel, like Hezbollah and especially Iran, Politico reports

“History tells us that ambiguity [in U.S. actions] invites aggression,” an AIPAC source who asked not to be named told Politico. The source added the group will now be engaged in a “major mobilization” over the issue.

The activists plan to visit hundreds of lawmakers from both parties as Obama mounts an uphill struggle to convince Congress to give him the green light to punish Assad for a deadly chemical weapons attack that killed hundreds of civilians.

But its leaders joined a broad coalition of Jewish groups, including the Anti-Defamation League and scores of prominent rabbis, in pushing for the Syria measure.

Its help is sorely needed. Tea Party Republicans are expected to line up virtually unanimously against the bill. And liberal Democrats, including Jewish and black lawmakers who usually support Israel, are deeply conflicted.

Liberal Jewish Democrat Alan Grayson (D-Fla.) has already predicted that the measure is “doomed” but it may be too early to count out Obama — and AIPAC — just yet.