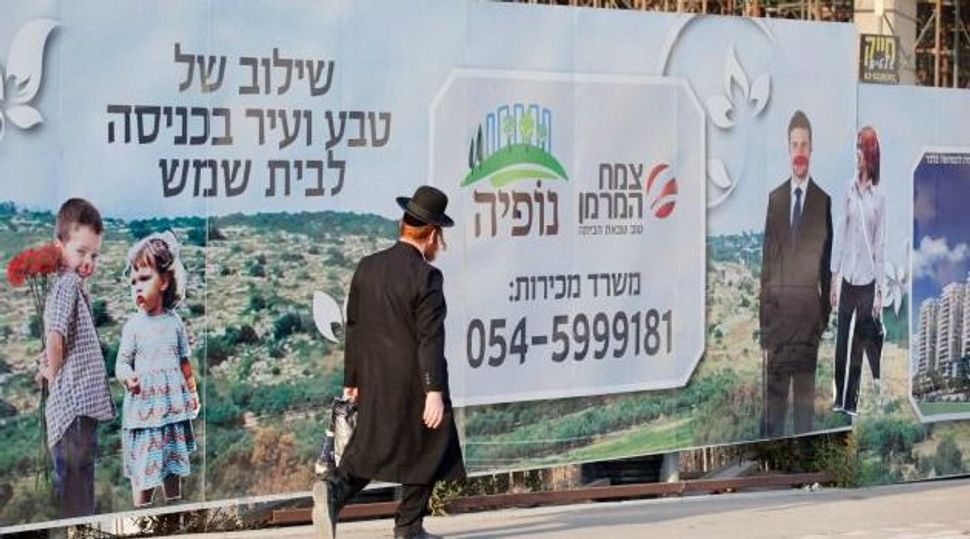 Fresh Faces: Activists inserted women?s images in billboards where they had been removed for fear of offending ultra-Orthodox Jews. Image by haaretz

Eve Finkelstein, a Beit Shemesh doctor, and her friend Esther (an alias) first encountered the billboards as they were driving down the Beit Shemesh’s main access road. The billboards surrounded a construction site of a new condominium project being built by Zemach Hammerman.

The project wasn’t marketed in the ultra-Orthodox community and isn’t located in a Haredi neighborhood. And yet, among the pictures of men and children, not a single woman or a teenage girl can be found on the billboard.

“This area is totally secular,” Esther explained. “It has malls and pictures of Bar Refaeli, it isn’t a Haredi neighborhood. I told Eve: let’s stick pictures of women and girls among the men and children. A day later, she went to measure the size of the characters on the sign and I went to the printers to choose from stock photos.”

At 7:00 P.M. on Sunday, Esther, Finkelstein, Nili Phillip (a women’s rights activist), seven other women and one man gathered at the sign and filled in the missing women. Near a man and boy they added a girl, near a suited man they placed a smiling woman, and elsewhere they added a picture of a curly-haired girl holding a basketball.

“I sent several Whatsapp and Facebook messages to acquaintances, and asked as many women who could to come,” Phillip said with excitement. “We weren’t afraid at all. It is something cute, we didn’t deface the signs.”