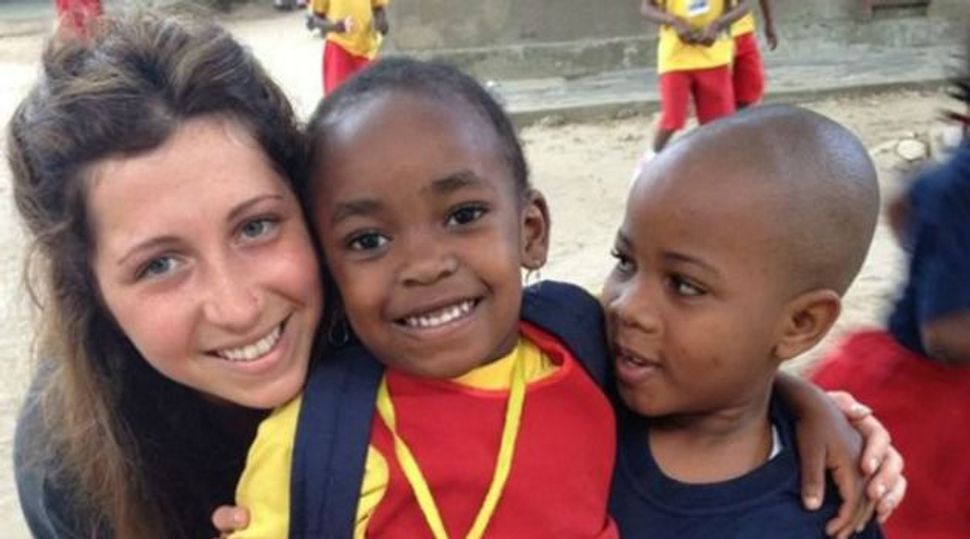 Happier Days: Kirstie Trup poses with children at a school in Zanzibar where she was volunteering before a horrifying acid attack. Image by trup family

A Jewish teenager from London has recounted last month’s terrifying acid attack that “seared her flesh,” disfiguring her and her friend on the African island of Zanzibar.

Speaking out for the first time, Kirstie Trup, 18, told the Sunday Times that she and volunteer pal Katie Gee had no hint of danger when two men on a motor bike approached them as they walked in the main town on the island on Aug. 8.

“I was about to ask them, ‘Is everything OK?’” she recalled to the paper. “But before I could utter a word, the driver nodded,” as if signaling the go-ahead.”

The men doused the two girls with battery acid, leaving them writhing in pain on the street.

“The burning sensation only intensified,” Trup recalled. “From then on chaos took over.”

Her friend ripped off her clothes and tried to run for help.

” I fell to the ground, yelling and scratching my face in pain and pulled at my hair in the hope of getting some help,” Trup said.

Onlookers, many wearing traditional Islamic attire, watched in horror, not knowing what had happened to the young foreigners. Eventually, some good Samaritans helped them get to the sea where they were doused with water.

The two women, who were volunteering at a school for several weeks, were flown to a hospital in the Tanzania capital of Dar Es Salaam, where the nation’s president, Jakaya Kikwete, visited them, before they flew home for more treatment in Britain.

Both women have undergone skin graft surgeries and face months of painful recovery.

Despite Kikwete’s vow to punish the attackers, no one has been charged with the attack.

It’s not known if Islamic radicals might have been responsible for the attack, which came at the end of the holy month of Ramadan.

The young women have insisted they were dressed modestly and there was no way anyone would have identified them as Jews.

Despite the anguish, Trup fondly remembered her time volunteering on the island.

“With each day that passes I reflect on my time in Zanzibar with Katie and the fun we had,” she said. “We laughed, sang and enjoyed every moment.”