The Mechanics of a Hasidic Bloc Vote 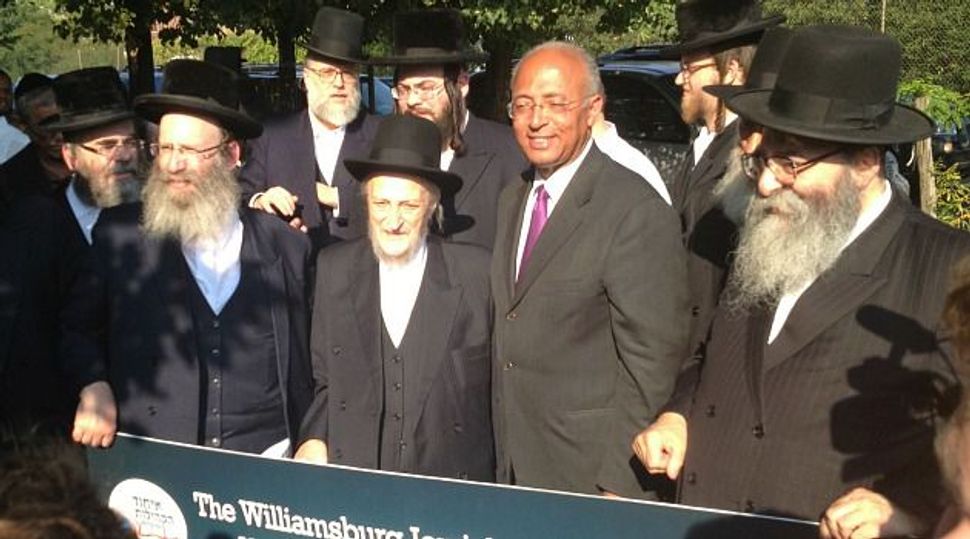 A Divided Bloc: Some Satmar Hasidim are vowing to deliver Brooklyn ultra-Orthodox voters to Bill Thompson in the Democratic mayoral primary, while others are putting their weight behind Bill de Blasio. Image by Josh Nathan-Kazis

How do you get 15,000 Satmar Hasidim to vote in the New York City Democratic primary?

That’s the question facing Satmar political activists from both of the dueling factions within the ultra-Orthodox Brooklyn sect, each of which have promised thousands of votes to mayoral candidates on September 10.

“We’re telling the kids to tell the parents that this is the candidate we endorse,” said Moshe Indig, a Satmar activist, describing Satmar outreach.

A few years ago, some activists say, kids were told that their parents needed to vote in order to get them a ticket to a local carnival with bouncy castles. This year Satmar activists are relying on more traditional methods, like handing out fliers to school kids.

“It’s not our first election,” said one Satmar activist involved in the get out the vote effort, which takes place in Brooklyn, where the sect is based.

The Satmar bloc vote is legendary in New York City politics for its discipline and its power. But ever since the Hasidic sect split in 2006 amidst a succession dispute, leaders of the resulting Satmar factions have jockeyed to demonstrate that their mini-bloc is the more important of the two.

This year, endorsements and political winds aligned for an epic clash between the factions over the crowded mayoral primary. The Zalis — followers of Satmar Grand Rabbi Zalman Teitelbaum — who dominate the Brooklyn neighborhood of Williamsburg, are backing former City Comptroller Bill Thompson. The Aronis — followers of Zalman Teitelbaum’s brother, Grand Rabbi Aaron Teitelbaum — who are weaker in Williamsburg but have schools and synagogues in Boro Park, are backing New York City Public Advocate Bill de Blasio.

While Aroni activists were willing to discuss get out the vote strategies with the Forward, Rabbi David Niederman, leader of the Zali political operation, did not respond to a request for comment.

Niederman, who in his day job doles out city-funded aid as head of the social service group United Jewish Organizations of Williamsburg, has reigned as the most powerful Satmar activist since the 2006 split. But in 2012, the victory of Aroni-backed Nydia Velazquez in a Democratic congressional primary gave the Aronis a major boost. Velazquez went on to win a congressional seat. And now, a handful of Aronis are hoping to challenge Niederman’s power again by showing him up in a citywide race.

Niederman’s Zalis and the Aronis each run efficient local political machines that claim to control thousands of votes.

Both of the machines benefit from a religious culture that values conformity and adhering to the will of the leadership. Both also benefit from the social insulation that persists even in the midst of metropolitan Brooklyn and makes the factional Yiddish-language newspapers key purveyors of news and opinion in the community.

Yet neither the Zalis nor the Aronis stop there with their get out the vote efforts.

The Aroni and Zali Satmar factions each have their own synagogues and religious school systems in Brooklyn, and a Satmar’s involvement in one or both is a good measure of his factional loyalty. Aroni activists build a list of eligible Aroni voters from synagogue membership rolls and lists of parents with children in the faction’s schools. They use that list to contact voters and urge them to support their candidates, targeting calls based on whether they have turned out to vote in the past.

The Aronis print palm cards with listings of their leadership’s endorsements that voters can take into the voting booths. The cards are distributed on street corners throughout Boro Park and Williamsburg.

The Aroni newspaper, Der Blatt, which endorsed de Blasio, has also been distributed throughout the neighborhood.

Both the Aroni and Zali factions indicate their political endorsements with variations on a logo that incorporates an image of palm tree, a reference to surname of the Satmar rebbes, Teitelbaum, which means palm tree in Yiddish.

According to Indig, children in Aroni schools are given fliers endorsing de Blasio to take home. “We’re telling the kids to tell the parents that this is the candidate we endorse,” Indig said. “Tell your mother, tell you father, to go out and vote for Bill de Blasio.”

Other Aroni activists said their faction hosted a carnival during a 2012 primary that was only open to children whose parents had voted. Indig denied the story, saying that it was a coincidence that the carnival took place on the day of the election.

Yet one Aroni activist said that the strategy was an old one. During former New York City mayor Rudy Giuliani’s 1997 reelection campaign, the activist recalled that his elementary school class won a contest collecting tickets given out to parents at the polls. As a reward, the class won a visit to JFK Airport in Queens where they saw a Concorde jet. “It was a very good trip,” the activist said.

On the morning of this election day, activists were set to flood Aroni synagogues after morning minyan, urging men to go to the polling stations. The Aroni strategy is to get men to the polls in the early morning so they will be clear for the women after kids are in school.

Aroni activists expect that turnout will be boosted this year by the competition with the Zali sect. “Everybody wants our candidate to have a good showing,” the Aroni activist said. “That’s just politics.”

The Mechanics of a Hasidic Bloc Vote