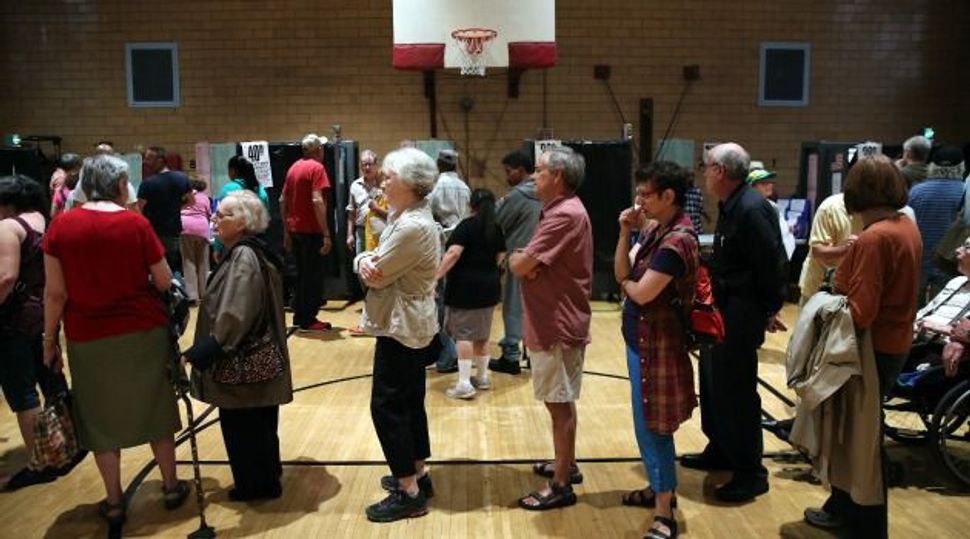 Unimpressed: Voters stand in line to cast their vote in the Democratic primary for the New York City mayoral race in Manhattan. Image by Getty Images

Outside one polling site on Manhattan’s Upper West Side, Jewish Democrats voiced dissatisfaction with the Democratic candidates for New York City mayor, and said they were open to voting for a Republican in November’s general election.

New York City’s partisan primary system means that Democrats could only pick among the Democratic candidates in the September 10 primary. Yet Jewish Democrats have often crossed party lines in recent mayoral races, a shift that could imperil the eventual Democratic nominee in the November 5 general election.

The polling site, located in a public school around the corner from Barnes & Noble on West 83rd Street, is where you would vote if you lived at Zabar’s. It’s the heart of the Upper West Side, an increasingly wealthy neighborhood full of Jews and liberals.

At 3 PM on primary day, traffic in and out of the designated site was slow. Most voters seemed to be women, some of them with small children.

That split seemed mirrored on the Upper West Side, where people stopped by the Forward reported having voted for all three of the leading candidates. Yet some said they would consider switching their support in the general election to back Joe Lhota, who is expected to win the Republican mayoral primary today.

“I think she’s a straight shooter,” said Diana Basso, 54, of Quinn, who she said she had voted for. Basso, who has Jewish family members, effusively praised Quinn’s experience in city government, but said that she had not yet decided on how she would vote in the general election.