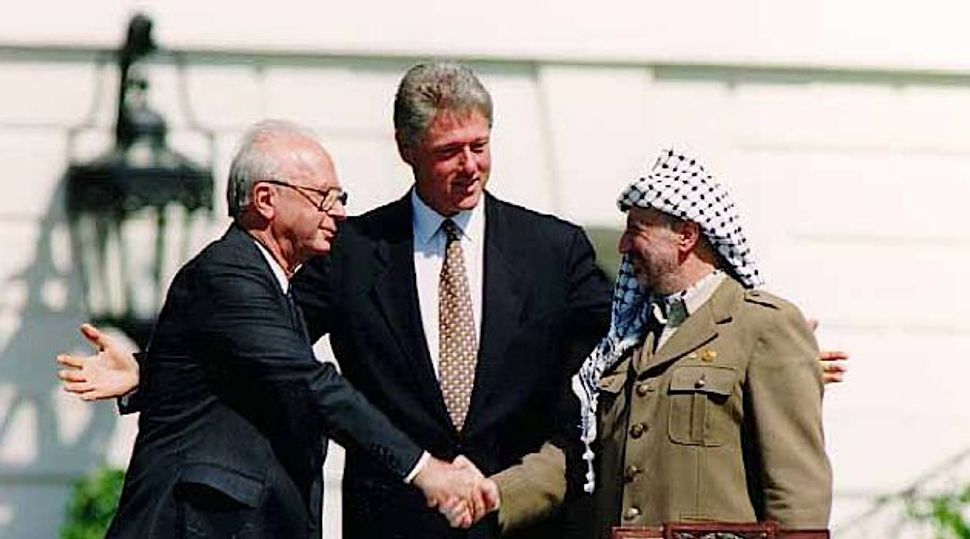 Two decades after Israeli and Palestinian leaders met on a sun-soaked White House lawn, hopes that their historic encounter would lead to peace have faded along with photographs of their hesitant handshake.

The Oslo Accords forged by Yitzhak Rabin and Yasser Arafat, now both in their graves, were meant to result in a permanent deal within five years, providing two states for two peoples.

Instead, the diplomatic milestone, signed in Washington on Sept. 13, 1993, led only to more violence and destruction, with each side blaming the other for the monumental failure.

To a chorus of skepticism and disbelief, the Israelis and Palestinians have just resumed U.S.-brokered direct negotiations once more, with little expectation that after years of tortuous diplomacy they will ever reach the finish line.

“I don’t see where one can develop optimism about these negotiations,” veteran Palestinian diplomat Nabil Shaath told reporters this week. “Look at us today: we are far worse than we were in terms of our relationship with Israel.”

Whoever is responsible for Oslo’s shortcomings, the results are clear to see. Israeli settlements are strung out across the occupied territories. Palestinians remain largely restricted to limited areas of self-rule. Mistrust predominates.

Settler numbers in lands conquered in the 1967 Middle East war have more than doubled since Oslo to over half a million. Israel has kept control of more than 60 percent of the occupied West Bank and around 80 percent of Palestinian water resources.

The fragmentation of the West Bank, the isolation of the Gaza Strip and Israel’s absorption of East Jerusalem mean that many people on both sides of the divide believe the so-called two-state solution is dead, making the current talks pointless.

“The two-state solution by now is unobtainable,” says Dani Dayan, a former chairman of the settler movement, arguing that any accord palatable to the Palestinians would involve removing so many settlers that it would be impossible to enact.

“Right now I don’t think there is a solution to the conflict. Until there is one, we have to make the life of the Israelis and Palestinians as good as possible.”

While Israel’s worries have largely shifted from its home front to distant adversary Iran, ordinary Palestinians bear the daily brunt of the talks’ inability to deliver them a state.

Arafat and his successor, current President Mahmoud Abbas, have made little headway challenging Israel’s widespread controls, but earned the ire of many locals for letting a favoured few grow wealthy under the occupation economy.

Israel, by contrast, has flourished. It doubled its international recognition to about 160 countries in the wake of Oslo, enabling it to reap far more trade benefits than the aid-dependent Palestinian Authority (PA) living in its shadow.

The PA was set up within the framework of the Oslo agreement – one of the most tangible results of the secret talks mediated by the Norwegian government, which cemented partial Palestinian rule in areas where Israel still holds effective sovereignty.

Early optimism over the accords was soon savaged by violence and Rabin was assassinated in 1995 by an ultra-nationalist Israeli who opposed any evacuation of Jewish settlements.

Arafat, the charismatic former guerrilla leader who always kept vague his intentions of ever accepting Israel’s legitimacy, allowed Palestinian militant groups free rein in the bloody “Second Intifada,” or uprising, which erupted in 2000.

Suicide bombers made gory wreckage of Israeli civilian buses and Israeli army raids blasted a deadly path of destruction in West Bank towns. The flicker of trust from Oslo was snuffed out, and Arafat died in Paris in 2004 after taking ill in his West Bank compound under siege from the Israeli army.

“I’ve come to the conclusion that we must start talks with discussions on security issues,” he said.

Top Palestinian diplomat Yasser Abed Rabbo said last week the talks thus far were “futile and won’t lead to any results”, while Shaath said Palestinians had resumed negotiations mostly to gain the freedom of 104 prisoners in Israeli jails, who will be released in four stages as discussions continue.

The clash of two unhappy neighbours in the heart of the West Bank, the Beit El settlement and the Jalazoun refugee camp, underscores the discontent of the last two decades.

The settlement has more than doubled in size since the signing of Oslo to almost 6,000, and Netanyahu last year promised to add hundreds of new homes there, looking to further entrench Israel’s grip on the rocky land.

“Israel doesn’t want peace and Oslo didn’t make anything easier. I used to do construction jobs in Ashdod (Israel) with a simple permit; now it’s all shut,” said Dar Omar.

Israel reduced by half its work permits for Palestinians to around 60,000 in the wake of the Intifada after Oslo stalled.

Black circles are burned into the rutted roads outside Jalazoun from tyres set aflame during frequent protests against army jeeps protecting the settlers.

The 15,000 impoverished Palestinians living in the shabby concrete warrens of Jalazoun descend from those who fled or were driven from homes in what is now Israel in the war of its founding in 1948. They long to go back, though Israel has ruled out the return of the roughly 5 million Palestinian refugees.

Israeli settlers and forces quit tiny Gaza in 2005 and Hamas Islamists formally sworn to Israel’s demise seized control of it from the Palestinian Authority in 2007. The internal Palestinian schism poses a further obstacle to any viable peace with Israel.

The dwindling band of Israeli supporters of the Oslo Accords say Palestinian demographics mean their leaders must one day make concessions and hand back lands captured in 1967 if Israel is to remain a state with a Jewish majority.

“Every day that passes, the more we doom this place to becoming a bi-national state that condemns the Zionist dream,” said Uri Dromi, a spokesman for slain prime minister Rabin.

“I still look at Oslo as a reminder that it can happen. Maybe we won’t make peace today or tomorrow, but we know it can happen. The two peoples are bound to live together and (thanks to Oslo) they had a brief taste of peace.”