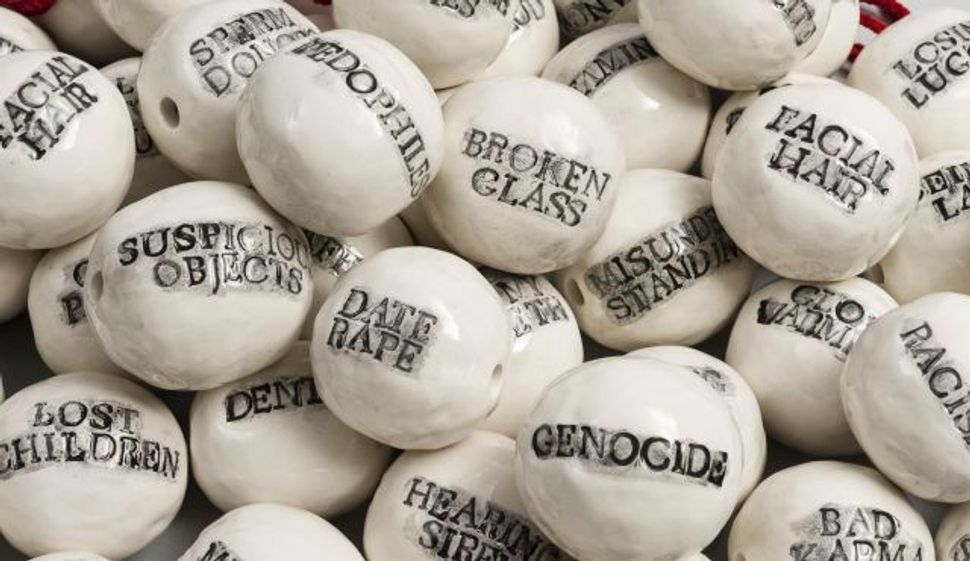 Andi Arnovitz?s beads, on view in Jerusalem, encapsulate her worries as well as a series of worries, in Hebrew, taken from morning prayers and the Talmud. Image by haaretz

Jewish art is not hip. It can be beautiful, sure. It can be meaningful, of course. It can be valuable, no doubt. But cutting-edge? Current? Cool? Meh.

If you believe that, you clearly have not yet been to the first-ever Jerusalem Biennale for Contemporary Jewish Art, which opened this week at five venues around town, with the participation of more than 50 artists showcasing a panoply of visions of what contemporary Jewish art can be.

“Don’t get me wrong,” begins Ram Ozeri, the 33-year-old mastermind behind the biennale and one of its seven curators. “It’s not that I don’t love menorahs or Torah scrolls,” he says, referring to the kinds of images that, along with pomegranates, dancing Hasids and the walls of Jerusalem, often come to mind – and with good reason – when the words “Jewish” and “art” combine.

“But this is something different.”

Take the work of Kansas City, Missouri-born Andi Arnovitz, 54, a firecracker of a former graphic designer, who moved to Israel with her high-tech wunderkind of a husband and five children – becoming religious along the way – 14 years ago.

Her two works, created specially for the biennale, challenge assumptions of what Jewish art is and can be – but do so by focusing on that quintessential of all Jewish themes: worrying.

“What do I worry about? Oh, everything,” she says simply.