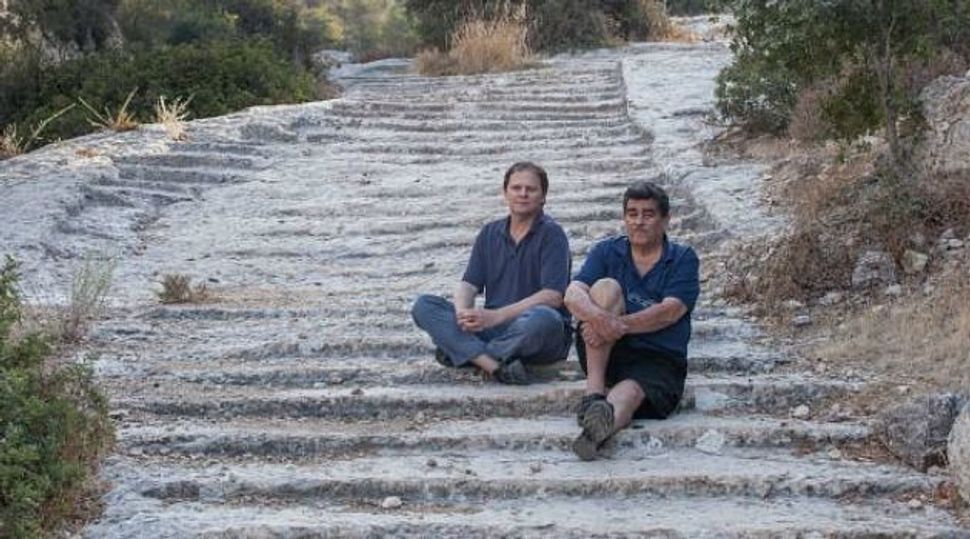 Roads Lead to Jerusalem: Yigal and Yotam Tepper sit on rock-hewn steps. They believe Second Temple-era roads were built by Jews, not Romans. Image by haaretz

“Roads are culture, links between people, the basis for commerce. They are a whole world,” says Yigal Tepper, a member of Kibbutz Yagur, farmer and Israeli scholar. Tepper, together with his son, the archaeologist Yotam Tepper, recently finished a fascinating study of rock-hewn roads in Israel. Together with relatives and a small group of friends, they walked and documented dozens of paths throughout the country.

Their research led them to contradict a scholarly consensus that rock-cut stepped roads leading to Jerusalem during Second Temple times were Roman projects. Rather, they say they were hewn by Jews who used them to make pilgrimage to Jerusalem.

The book that emerged from their project, which was carried out without any institutional support, is entitled “The Roads that Bear the People — Pilgrimage Roads to Jerusalem in the Second Temple Period” (Hakibbutz Hameuhad). The name came from a term used by the Roman-Jewish historian Josephus Flavius for the pilgrimage road known as the Beth Horon Ascent.

Yigal Tepper is already bracing for criticism. “We are the only ones who claim that these roads were not made by the Romans,” he says.