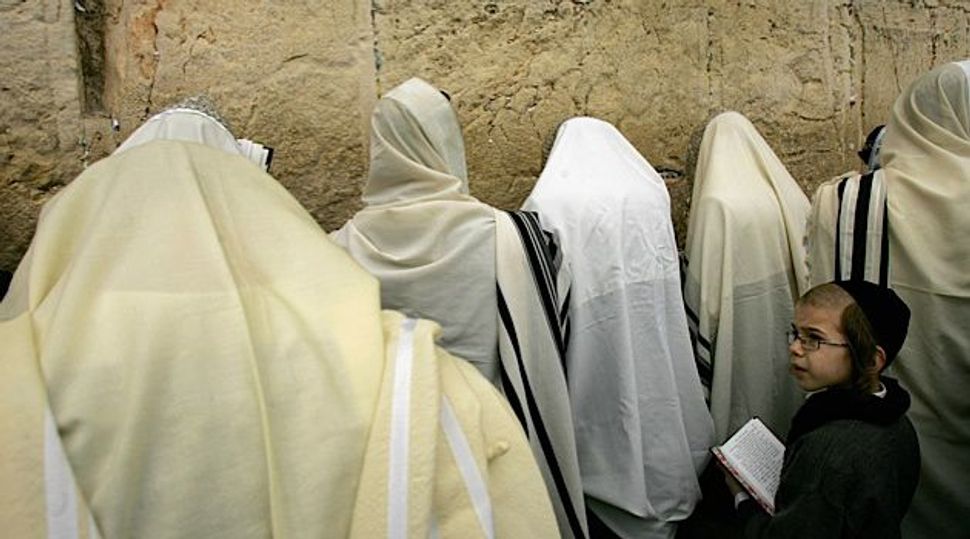 Mass Blessing: 80,000 men gathered at the Kotel during Sukkot to receive a priestly blessing from 100 Kohanim. Image by getty images

Some eighty thousand men gathered at the Western Well for the holiday priestly blessing.

Some 100 kohanim blessed the men gathered for morning prayers on Sunday, according to a statement issued by the office of the Rabbi of the Western Wall.

Among those in attendance at the prayer service were the chief rabbis of Israel, Rabbi of the Western Wall Rabbi Shmuel Rabinowitz , and Jerusalem Mayor Nir Barkat.

Many of those in attendance at the priestly blessing, or birkat kohanim, were Jews from the Diaspora who are visiting Israel for the Sukkot holiday.

A special prayer was held for 93-year-old Rabbi Ovadia Yosef, the spiritual leader of the Sephardi Orthodox Shas party, who was taken to the hospital Saturday night for the third time in several weeks. A special prayer also was recited for the safety of Israeli soldiers and security forces.

The uplifting sight of masses of the People of Israel filling up the Western Wall plaza to capacity is reminiscent of older times, and more remeniscent of the Temple than its destruction,” Rabinowitz said in a statement. “They are an impressive and awe-inspiring testimony to the People of Israel and its attachment to the relic of our Temple, when masses come to touch the holy site’s stones: the stones of holiness. It is difficult not to be awed by the power these scenes transmit, displays of the veritable fortitude of the People of Israel.”