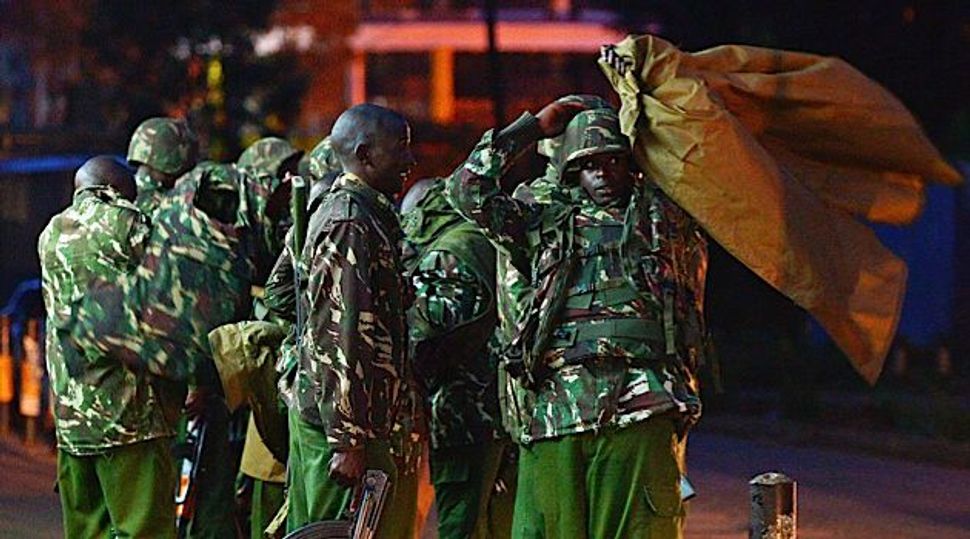 Ending the Massacre: Kenyan police stand guard near Westgate mall in Nairobi as forces work to end the siege. Image by getty images

The assault, which began shortly before sundown, came as two helicopters circled the mall, with one skimming very close to the roof. A loud explosion rang, far larger than any previous grenade blast or gunfire volley.

Kenyan police said on Twitter that a “MAJOR” assault by security forces had started to end the two-day siege. “This will end tonight. Our forces will prevail. Kenyans are standing firm against aggression, and we will win,” Kenya’s Disaster Operations Centre said on Twitter.

The assault came about 30 hours after 10 to 15 al-Shabab extremists stormed the mall from two sides, throwing grenades and firing on civilians. About 175 people were wounded in the attack.

Loud exchanges of gunfire emanated from inside the four-story upscale mall, throughout the day Sunday. Kenyan troops were seen carrying in at least two rocket propelled grenades and helicopters hovered over the mall throughout the day. Al-Shabab militants reacted angrily to the helicopters on Twitter and warned that the Kenyan military action was endangering hostages.

Kenyan officials said they would do their utmost to save hostages lives, but no officials could say precisely how many hostages were inside. Kenya’s Red Cross said in a statement citing police that 49 people had been reported missing. Officials did not make an explicit link but that number could give an indication of the number of people held captive.