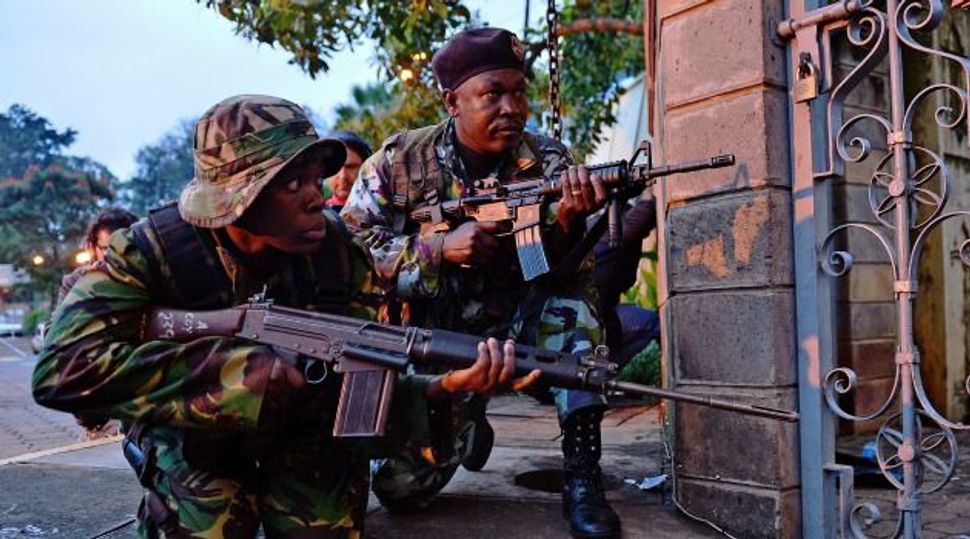 The blast was followed by other smaller detonations and volleys of gunfire but there was no indication of the fate of people whom the authorities say are being held by 10 to 15 Islamist gunmen who took the complex by storm on Saturday.

As troops ran into new positions, one security official told Reuters at the scene: “It is us who caused the explosion, we are trying to get in through the roof.” He declined to be named.

Military spokesman Colonel Cyrus Oguna declined comment when asked whether security forces had set off the detonations or whether militants had set off explosives inside the building.

A plume of oily black smoke was still pouring from the building after half an hour.

A senior officer had said police were “closing in” on the militants after rescuing more trapped people overnight. But officials have been suggesting since Sunday that the siege may be near an end, while the guerrillas seemingly remain at large.

Interior Minister Joseph Ole Lenku said “a few” people were still hostage: “Our disciplined forces … have been extremely careful to find the balance between neutralising the attackers and getting as many people to safety as possible,” he added.

A spokesman for al Shabaab, which has demanded Kenya pull its troops out of neighbouring Somalia, warned they would kill hostages if Kenyan security forces, who are being assisted by Western and Israeli experts, tried to storm their positions:

“Israelis and Kenyan forces have tried to enter Westgate by force but they could not,” Sheikh Ali Mohamud Rage said in an audio statement posted online. “The mujahideen will kill the hostages if the enemies use force.”

On Twitter, the group posted: “As the operation gathers momentum inside #Westgate, the Mujahideen are for the 3rd day still in full control of the situation on the ground.”

The Red Cross said on Monday that the death toll since Saturday’s initial lunchtime bloodbath stood at 69. But Interior Minister Lenku said that was wrong and that only 59 were dead.

The Red Cross also said it had also recorded 63 people being reported by relatives as missing.

Survivors’ tales of the military-style assault by squads of attackers hurling grenades and spraying automatic fire, has left little doubt the hostage-takers are willing to kill. Previous raids around the world, including at a desert gas plan in Algeria nine months ago, suggest they are also ready to die.

President Uhuru Kenyatta refused on Sunday to pull Kenyan troops out of Somalia, where they have pushed al Shabaab on to the defensive over the past two years as part of an African Union-backed peacekeeping mission across the northern border.

Asked on Sunday about whether captives had been wired with explosives, he declined comment. Kenyatta said all the gunmen were in one place. But a Kenyan soldier told reporters near the mall on Monday that the assailants and hostages were dispersed.

“They’re in the cinema hall, with hostages. There are other terrorists in different parts,” the soldier said. “They are on the upper floors, the third and fourth floors.”

Previously, officials had indicated that the militants may have been grouped in a supermarket on the lower floors.

The president, who lost a nephew in Saturday’s killing, vowed to hold firm in the “war on terror” in Somalia and said, cautiously, that Kenyan forces could end the siege.

“I assure Kenyans that we have as good a chance to successfully neutralise the terrorists as we can hope for,” he said. “We will punish the masterminds swiftly and painfully.”

It was unclear who the assailants were. Al Shabaab – the name means “The Lads” in Arabic – has thousands of Somali fighters but has also attracted foreigners to fight Western and African Union efforts to establish a stable government.

A London man, Jermaine Grant, faces trial in Kenya for possession of explosives. Police suspect an al Shabaab plot to attack restaurants and hotels used by Westerners and have been hunting for another Briton, Samantha Lewthwaite, the widow of a suicide bomber who took part in the London 7/7 attacks of 2005.

Some British newspapers speculated on the role the “White Widow” might have played at Westgate. The term “black widow” has been used by Chechen militants in Russia for women taking part in bombings and assaults after the deaths of their husbands.

British Prime Minister David Cameron, confirming that at least three Britons were already among the dead, said: “We should prepare ourselves for further bad news.”

U.S. President Barack Obama called Kenyatta to offer condolences and support. Israel, whose citizens own stores in the Israeli-built mall and have been targeted by Islamists in Kenya before, said Israeli experts were also helping.

As well as Kenyans, foreigners including a French mother and daughter and two diplomats, from Canada and Ghana, were killed. Ghanaian Kofi Awoonor was a renowned poet. Other victims came from China and the Netherlands. Five Americans were wounded.

Kenya’s president, son of post-colonial leader Jomo Kenyatta, is facing his first major security challenge since being elected in March. The crisis might have an impact on his troubles with the International Criminal Court at The Hague.

Judges there let his vice president, William Ruto, fly home for a week, suspending a trial on Monday in which Ruto is charged with crimes against humanity for allegedly coordinating violence after an election in 2007. Kenyatta is due to face trial on similar charges later this year.

Western powers are alarmed by Islamist violence across Africa, from Nigeria in the west, through Mali, the Maghreb states in the north to Somalia and now Kenya in the east.

Al Shabaab’s siege underlined its ability to cause major disruptions with relatively limited resources, even after Kenyan and other African troops drove it from Somali cities.

“While the group has grown considerably weaker in terms of being able to wage a conventional war, it is now ever more capable of carrying out asymmetric warfare,” said Abdi Aynte, director of Mogadishu’s Heritage Institute of Policy Studies.

Others pointed to divisions within the loose al Shabaab movement that may have driven one faction to carry out the kind of high-profile attack that may help win new support.

“External attacks tend to happen when a group is trying to consolidate,” said Leah Farrall, a former senior intelligence analyst with the Australian Federal Police. “In recent months, you have been seeing a tremendous amount of fracturing in their domestic environment,” she said of al Shabaab’s Somali base.

The 2008 Mumbai attacks, which also involved mass shooting and hostage taking, was driven in part, analysts believe, by competition for funds and volunteers with other Islamist groups.

Al Shabaab’s last big attack outside Somalia was a double bombing in Uganda that killed 77 people watching soccer on television in 2010. The Westgate assault is the biggest such incident in Kenya since al Qaeda’s East Africa cell bombed the U.S. embassy in Nairobi in 1998, killing more than 200 people.

After emerging on Sunday morning from a hiding place under a vehicle in the basement car park, a woman, giving her name as Cecilia, told Reuters she had seen three of the attackers.

“They were shooting from the exit ramp, shooting everywhere,” she said. “I saw people being shot all around me, some with blood pouring from bad wounds. I was just praying, praying ‘God, keep me alive’ and that my day hadn’t come.”

For hours after the attack, the dead were strewn around tables of unfinished meals. At one burger restaurant, a man and woman lay in a final embrace, until their bodies were removed.