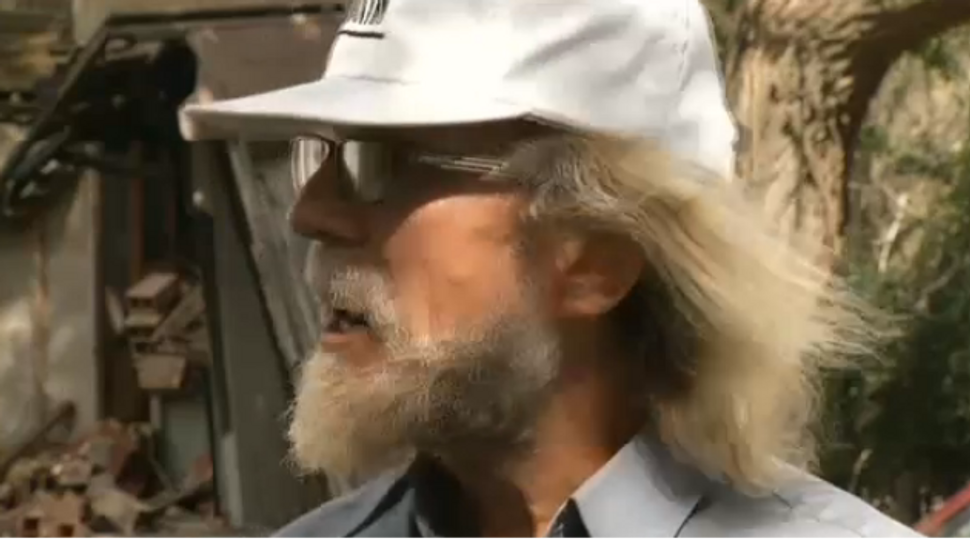 No Secret: Craig Cobb openly boasts of his hope to turn tiny Leith, N.D. into a haven for white supremacists. Image by courtesy of kxmb

Hundreds of demonstrators turned out in the tiny North Dakota town of Leith on Sunday to protest plans by an American Nazi group to move in and take over the local government.

The loud but peaceful demonstrators, many of them Native Americans from nearby reservations, were on hand for a visit from Jeff Schoep, commander of the National Socialist Movement, and several followers.

The National Socialist Movement is America’s largest neo-Nazi organization, founded in 1974 by former members of the American Nazi Party, according to the Southern Poverty Law Center.

The group hopes to move enough members into Leith – population 17 – to take over the local government.

Schoep and his followers were in Leith on Sunday to survey property purchased for them by local resident Craig Cobb, whose yard is adorned with swastika flags.

Leith Mayor Ryan Schock said city officials were discussing the possibility of unincorporating the city and turning it back over to the county to scuttle the hate group’s plans.

“This is a small, quiet town,” Schock said. “Families live around here, and it’s a very close-knit community. I really wish it hadn’t gotten to this point.”

The protesters, shouting slogans like “Go Home” and “No Hate in Our State,” included more than 200 Native Americans from the nearby Standing Rock Reservation, as well as other reservations from North and South Dakota.

Members of the Grant County Sheriff’s Department were joined by deputies from several surrounding counties. More than a dozen North Dakota Highway Patrol officers also turned out in riot gear, but no violence was reported, officials said.

For more than a year, Cobb, a white supremacist activist, has been buying up properties in Leith and inviting his fellow supremacists to move in and set up a “Pioneer Little Europe,” as some supporters have called it, according to the Southern Poverty Law Center.

In a recent interview with KXMB-TV in Bismarck, Cobb said he had gotten a lot of offers to buy up land from what he termed like-minded people who believe white people should not be punished for wanting to live near each other.

“It’s fine for all these other minorities, but not us,” he said in the televised interview. “If you merely speak about it, you’re going to be defamed in this country.”

Cobb’s plans were revealed in August after the Alabama-based Southern Poverty Law Center published a report detailing his land purchases in Leith, which is located in a county that is 97 percent white.

The center’s report also cited county tax and property records showing that other leading supremacists, in addition to the National Socialists, had followed his lead, including Tom Metzger, leader of the White Aryan Resistance, and Alex Linder, who runs the Vanguard News Network, an online forum for the neo-Nazis.

Cobb said he would fight the health department in court if necessary.