2 New Synagogues Open in Kiev for Reform and Orthodox Jews 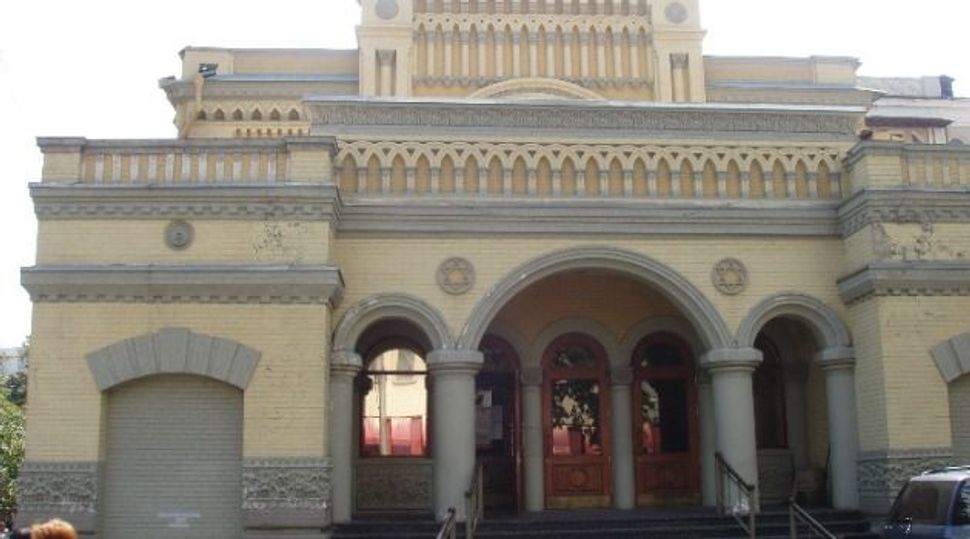 There?s Company: Kiev?s Central Synagogue is an imposing structure. Now there are two new synagogues in the Ukrainian capital.

Two new synagogues, one of them for a Reform community, opened in Kiev.

Some 120 people attended the Sept. 27 dedication ceremony of the Reform synagogue and community center of the Congregation Hatikva in the Ukrainian capital, according to Alexander Haydar, executive director of the Religious Union for Progressive Jewish Congregations of Ukraine.

The new structure, bought and paid for with donations by three North American families, replaced “very inadequate rental facilities” which had served the community for 22 years, a statement published Thursday by the World Union for Progressive Judaism read.

Situated in Kiev’s historic Jewish neighborhood, Podol, the new, 4,000 square-feet center cost about $1 million to build, Mike Garbiner, the world union’s chairman, told JTA. The center has a sanctuary with seating for 150; activity rooms; a library; youth center and kitchenette.

Haydar old JTA that some 12,000 people take part in the programs run by 40 Progressive congregations in Ukraine. Kiev’s has some 800 members, he said. Ukraine has some 360,000 Jews, according to the European Jewish Congress.

Just south of the Reform center, Rabbi Moshe-Reuven Azman, a chief rabbi of Ukraine, on Sept. 25 helped inaugurate the new Orthodox Abraham Malach Synagogue, which was purchased for local Jews by philanthropist Ze’ev Levitan, Azman said. The new synagogue has a small dormitory for Jews who want to spent Shabbat and holidays there, Azman said.

“Synagogues are getting crowded. There is a real Jewish awakening among Ukrainian Jews,” Azman told JTA. “That’s why we are seeing new synagogues opening up.”

The Reform center‘s dedication ceremony was attended by its three donating families — Susan and James Klau of Rhode Island; Austin and Nani Beutel of Toronto; and Anne Molloy and Henry Posner III of Pittsburgh – and leaders of other Progressive Jewish communities.

The guests also held a memorial service at Babi Yar, the place where Nazis gunned down more than 33,000 Jews in September 1941 in one of the worst Holocaust-era massacres.

“Today is no less real than yesterday,” Rabbi Joel Oseran of the Union said during a speech. “And today we look around this new synagogue center and feel the power of Jewish renewal and rebirth.”

2 New Synagogues Open in Kiev for Reform and Orthodox Jews